Chalet & Garden of the Countess of Edla, Sintra, Portugal.

Chalet & Garden of the Countess of Edla

I have to admit, I had not heard much about this hidden gem in Sintra until a private tour guide brought us there. On the day we visited, Sintra was shrouded in mist and fog and it was raining when we arrived at the Chalet. Of course, this did mean that the garden was super green and lush.

Our visit to the Chalet & Garden of the Countess of Edla was the first stop on our tour, a clever move by our guide as we were able to purchase our tickets for Pena Palace there also and so we avoided the massive queues when we arrived at Pena Palace an hour or so later (the second stop on our tour).

We all loved this tourist site, it was so quiet and it would have been great to spend longer walking around the gardens but unfortunately due to the weather this was not possible.

In 1869 Dom Ferdinand II married Elise Hensler, the Countess of Edla. Rumour has it that they had been having a long term affair for much of his first marriage. The Countess of Edla was born in Switzerland but moved to America along with her family when she was 12 years old. Later in her life she was highly respected and thought of as a very intelligent, well educated and talented young woman. She was also known for her acting and singing abilities.

Dom Ferdinand II and the Countess constructed the Chalet and the surrounding garden in the western part of the park between 1864 and 1869. It is said that it was necessary for the Countess to have her own living space away from the former Kings first family as they did not accept the the Countess or their marriage and did not want her living in the main palace with them. You can read more about the Chalet and its occupants here.

The Chalet of the Countess of Edla really does resemble the Chalets that you see in the alpine ski resorts of Switzerland and/or Austria. Of course there is one stand out difference, the use of cork as a decorative feature on the exterior of this Chalet (and later we observed it was used a lot in the interior also). The reason for its use is pretty obvious, cork is one of Portugal’s most important and biggest exports. You will never be far from a “cork shop” no matter where you are in Portugal.

“Cork is one of the most characteristic natural products of Portugal and is part of everyday life without even realizing it.” (Source here).

The exterior of the Chalet also features a plaster coating that simulates timber cladding. Here was our first glimpse of the Chalet: 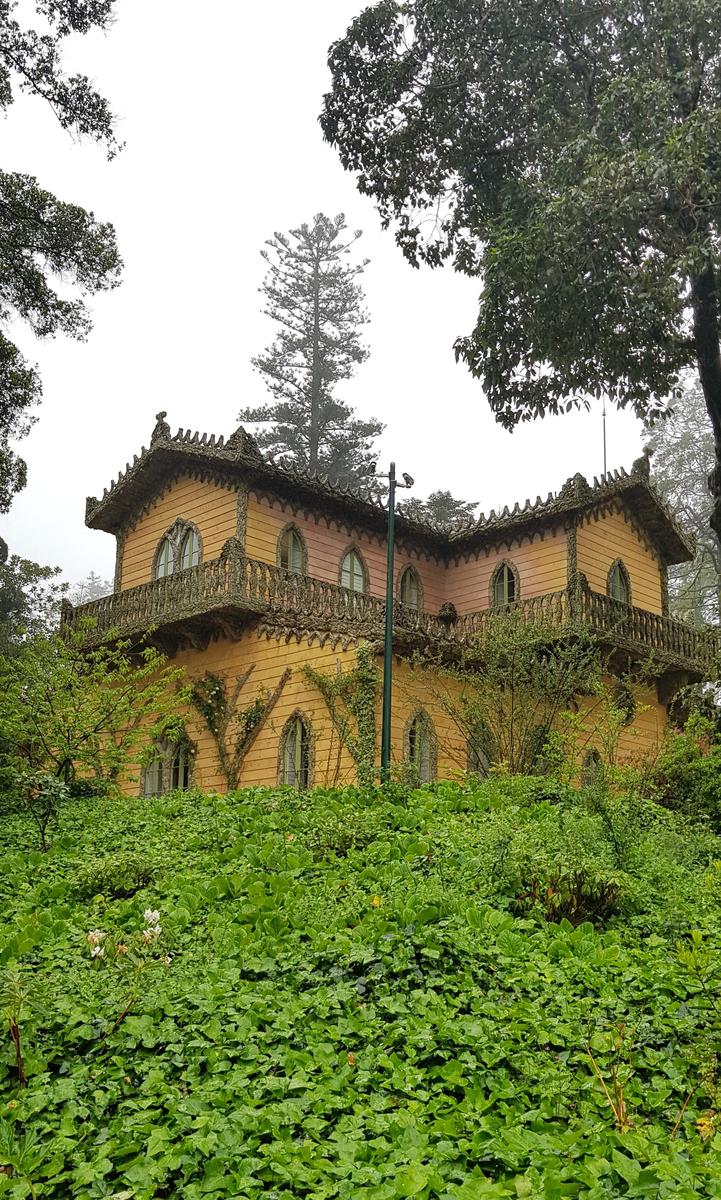 As you get closer, you can see that on the Chalets exterior, cork is moulded to cover balusters and to simulate creeping plants and it is certainly eye-catching, one of the first things we noticed, so unique and beautiful: 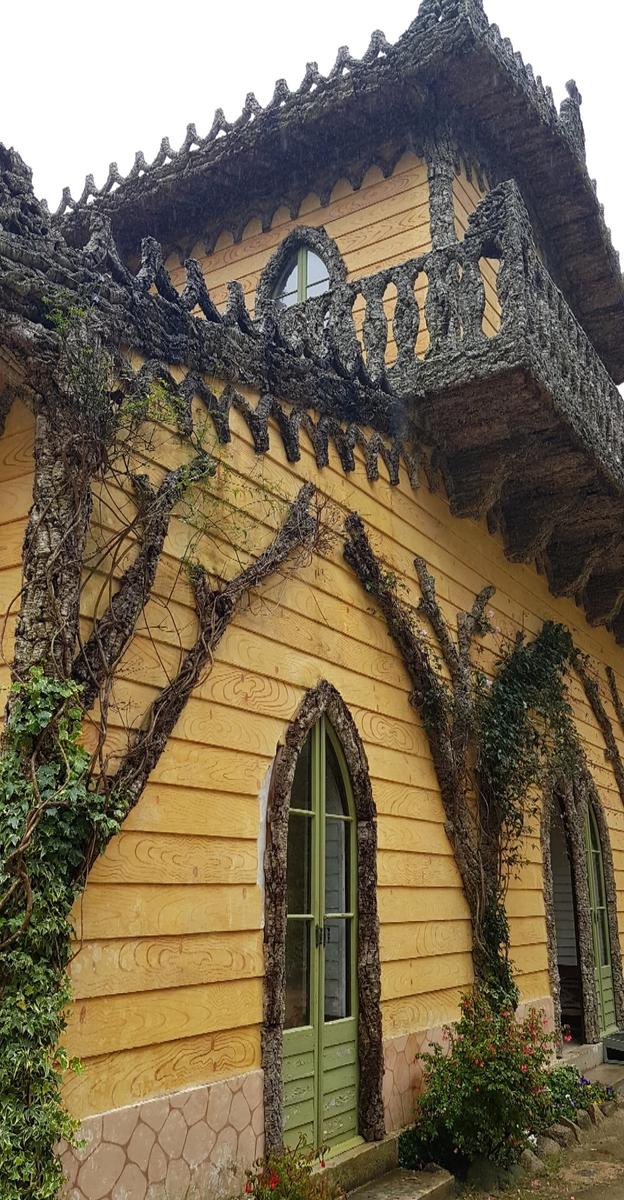 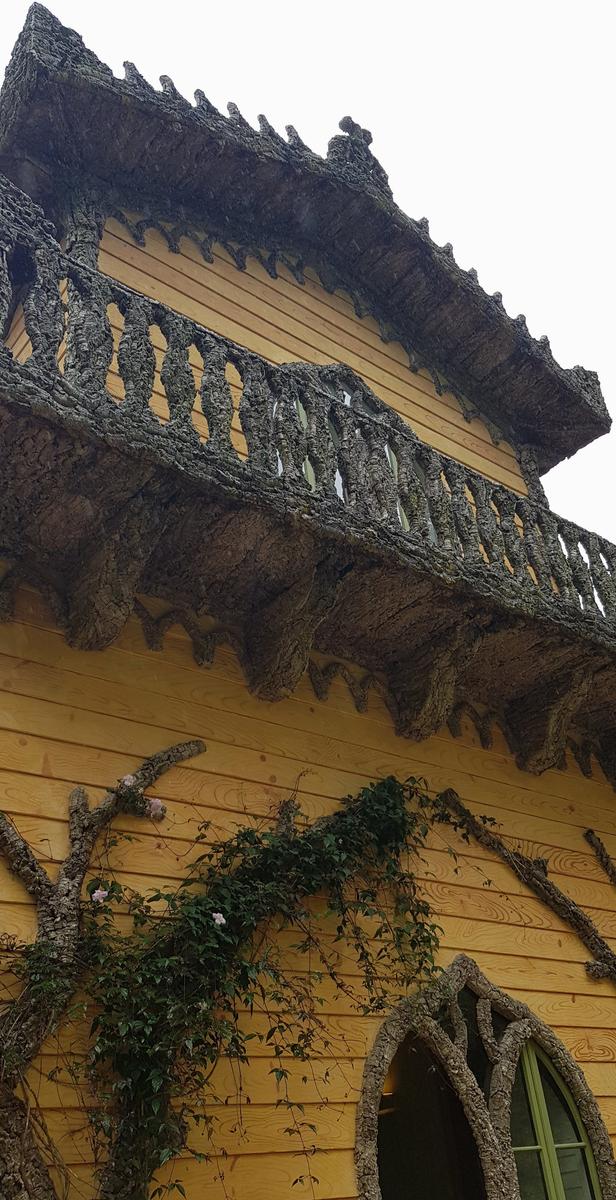 Lots of lovely flowers also around the entrance:

The Countess herself waiting to welcome us! 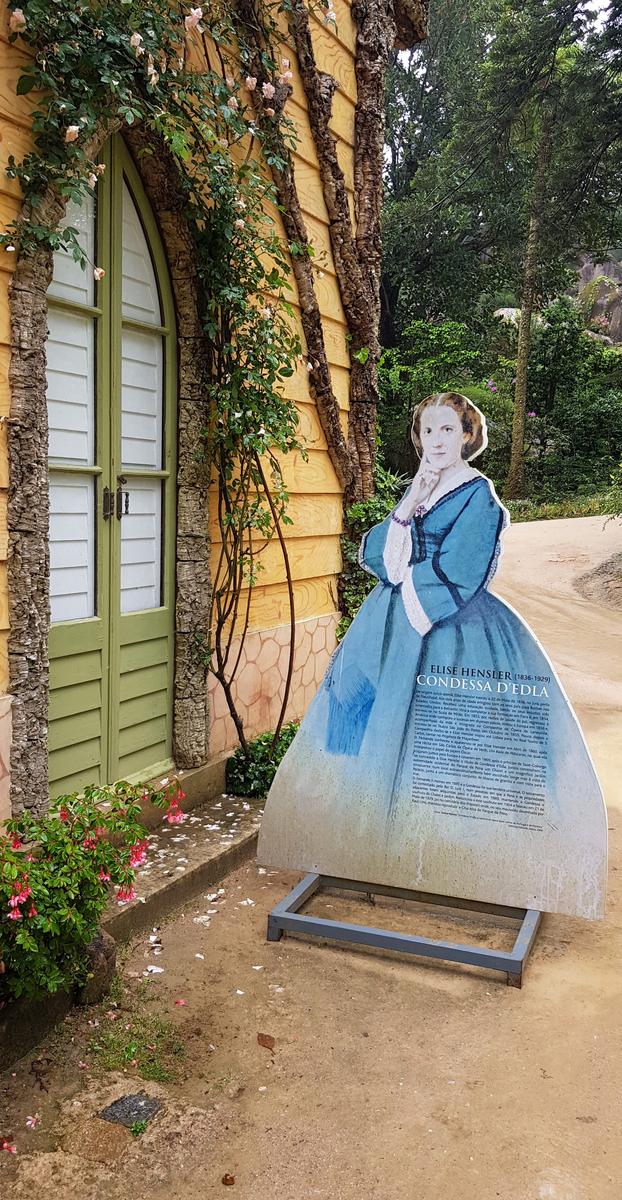 Inside The Chalet - Ground Floor:

The Grand Hallway - the ceiling was so beautiful:

The Ivy Room which as you can see is decorated in stucco simulating ivy that emerges from four trunks in each of the corners of the room:

The Dining Room which is lined with inlaid wood and cork panels: 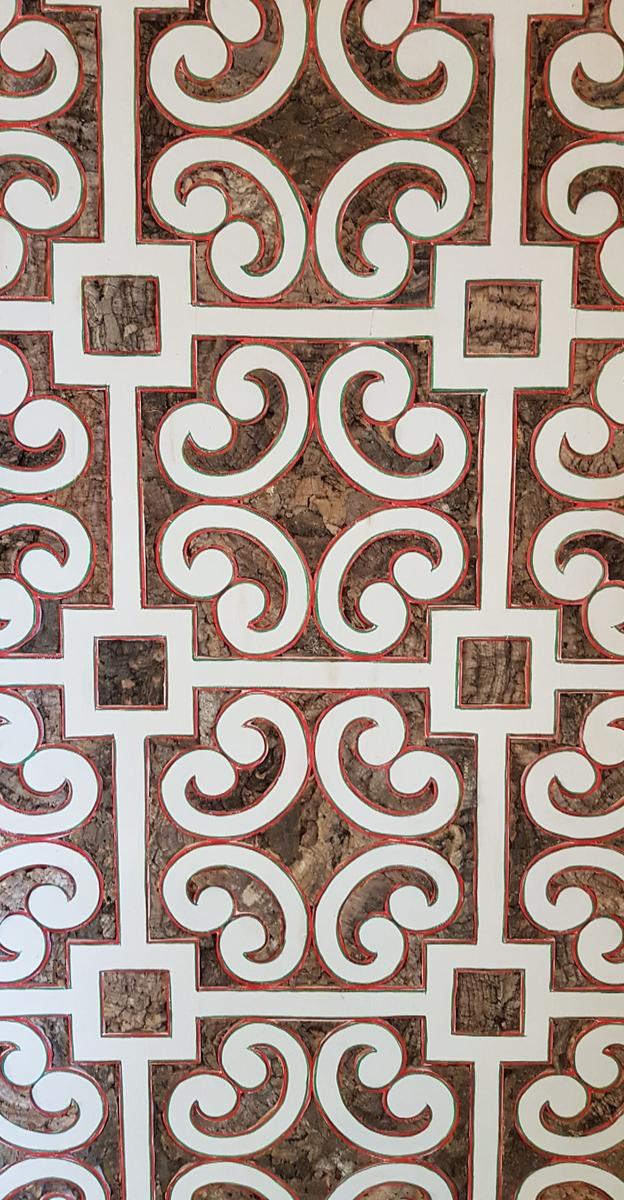 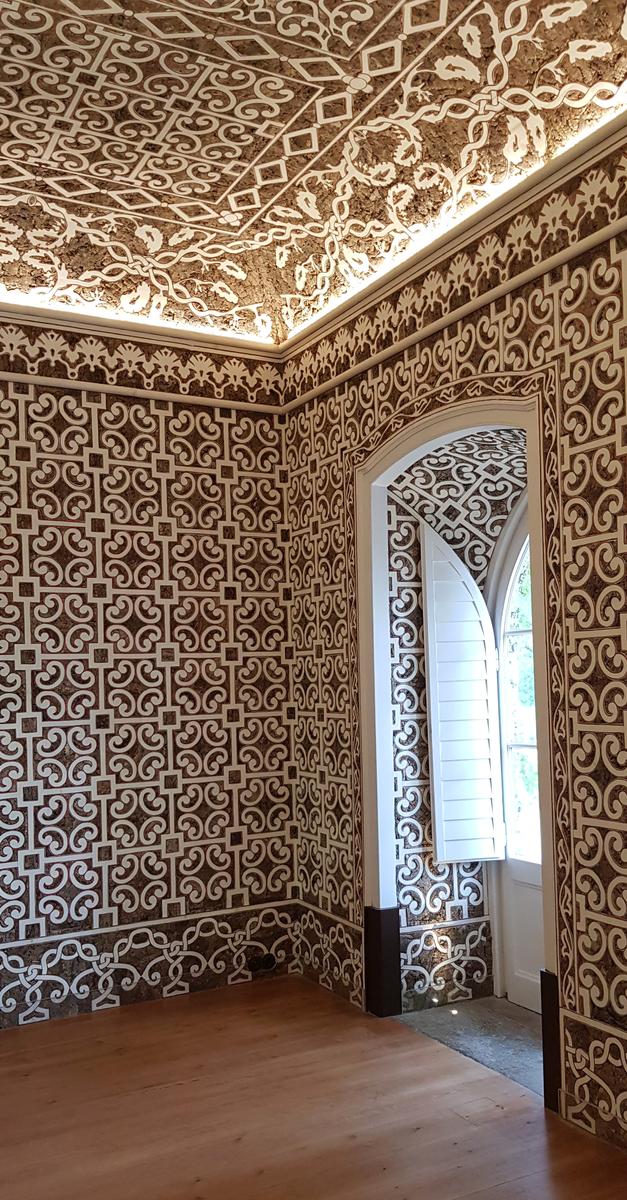 The gorgeous ceiling of the dining room: 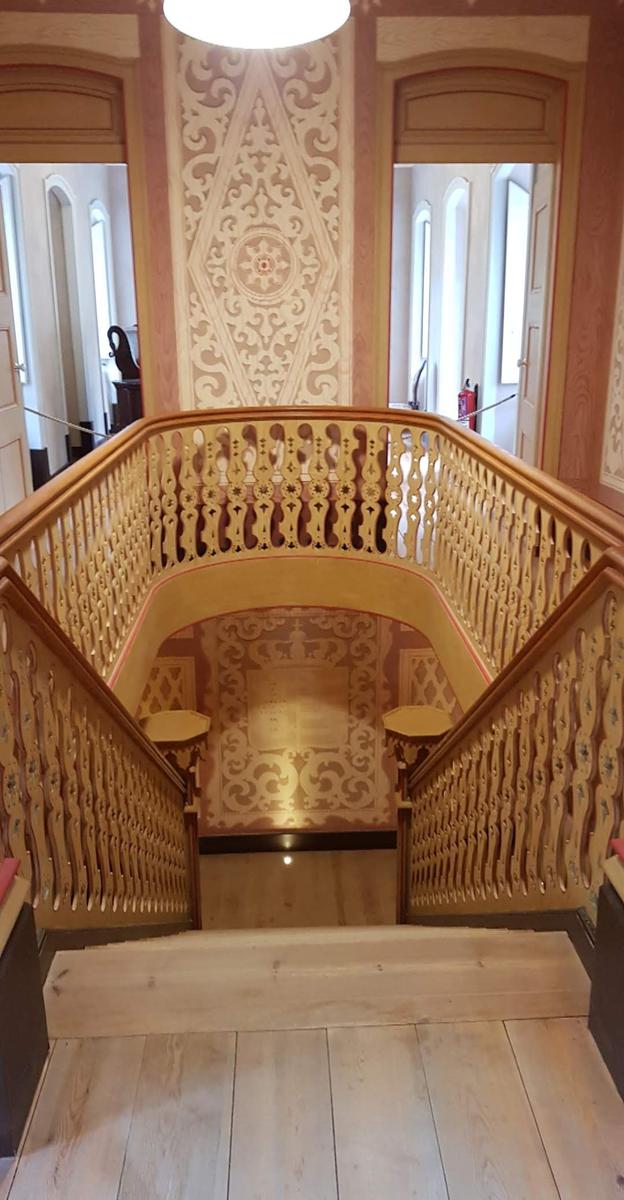 Inside The Chalet - Upper Floor:

The King’s Dressing Room/Office which was once painted in trompe l’oeil to simulate padding but was subsequently covered with inlaid cork panels:

One of the bedrooms:

The Lace Room which served as a dressing room for the Countess:

I think you will agree that the interior of the Chalet was very impressive, I certainly wouldn’t mind living there!

Next time we will have to concentrate on exploring the garden as it was a real pity that we had to skip it on this visit. The garden boasts a botanical collection of over 200 species that were introduced by Dom Ferdinand and the Countess. This resulted in a vast landscape filled with a combination of native vegetation and exotic specimens from all over the world (Dom Ferdinand was somewhat of a gardening/exotic plant collecting fanatic). The garden also has glasshouses, an aviary, stables and a vegetable garden as well as much much more! Check out the map below:

The Chalet and Gardens of the Countess of Edla might not have been on our radar prior to our visit but we are so glad we were introduced to it and would definitely recommend you visit it some time.

Some other attractions that we love in Sintra include: