Taking in the View from Torre, Mainland Portugal’s Highest Point:

While we were staying in São Romão we took the opportunity to drive most of the way to Torre, mainland Portugal’s highest mountain located in Serra da Estrela. The drive from São Romão took about 40 minutes and as you would expect, it was scenic one.

Torre is quite unique as despite being mainland Portugal’s highest mountain, it is accessible via a two lane tarmacked road - a rare occurrence as in our experience mountain peaks usually involve hiking, sweating and even sometimes some scrambling! So Torre is very accessible to all and probably for this reason we did not meet anyone else hiking around or up to it.

“At 1,993 metres at its highest point in Torre, Serra da Estrela is an area of rare landscape beauty, with striking mountain drops, where you can have a deep experience of the silence of the heights.” (Source here).

As usual, we were on the road early and parked up in a designated parking area close to the Estância de Ski da Serra da Estrela along the N339 (the main road to Torre) by 9am. It was really quiet and another glorious Summer’s day.

We chose to stop here instead of driving all the way to Torre as I had read that there were some nice paths in this area and that we could walk the final couple of kilometres of Torre from here so that is what we did. I will say, while there were some trail markers there were not a lot and there was a lot of eye balling Torre (or the domes that are there which are visible at the top of the mountain) and walking in the general direction. This worked out fine for us as due to the time of year of course there was no snow or deep rivers etc. to contend with. I did have an encounter (despite my best efforts to avoid them) with two very grumpy, very big Estrela mountain dogs who were protecting their flock of sheep and apparently regarded me as a significant threat! Not the nicest experience but no harm done.

We started our walk next to the chair lifts of the Estância de Ski da Serra da Estrela where sheep were happily grazing:

We followed the trail, passing the ski building on our right: 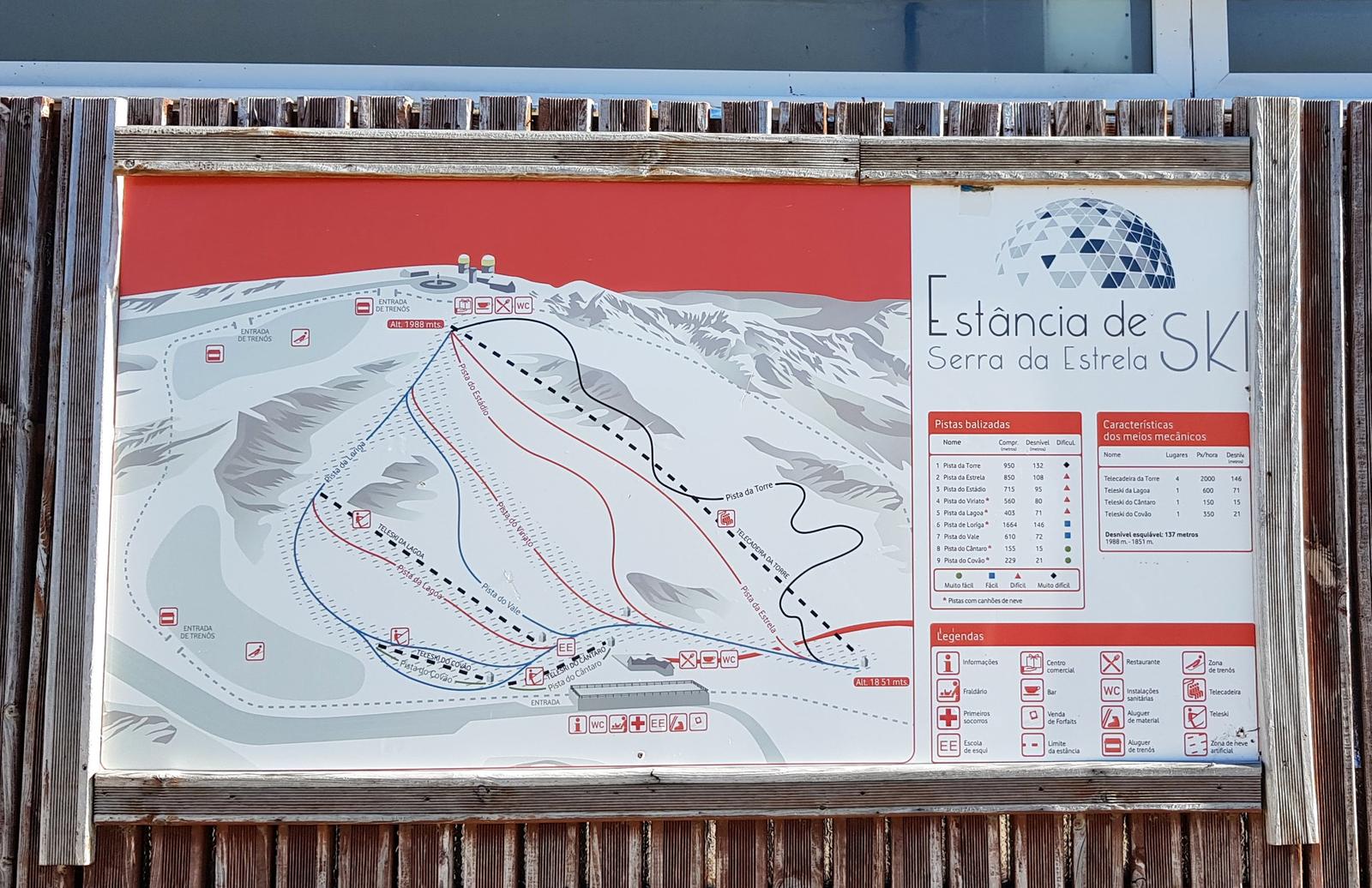 And simply kept walking straight, following a very obvious path until we saw the blue water of Lagoa Serrano and Lagoa do Covão das Quelhas ahead of us. The path on the right in the photos below is the path we followed:

Rewarding views for such an easy short walk!

Again you can see the path we were following the the photo below:

We walked across the wall that you can see on the right in the photos below:

A close up of the wall below and I was thinking “please don’t fall” as I made my way over: 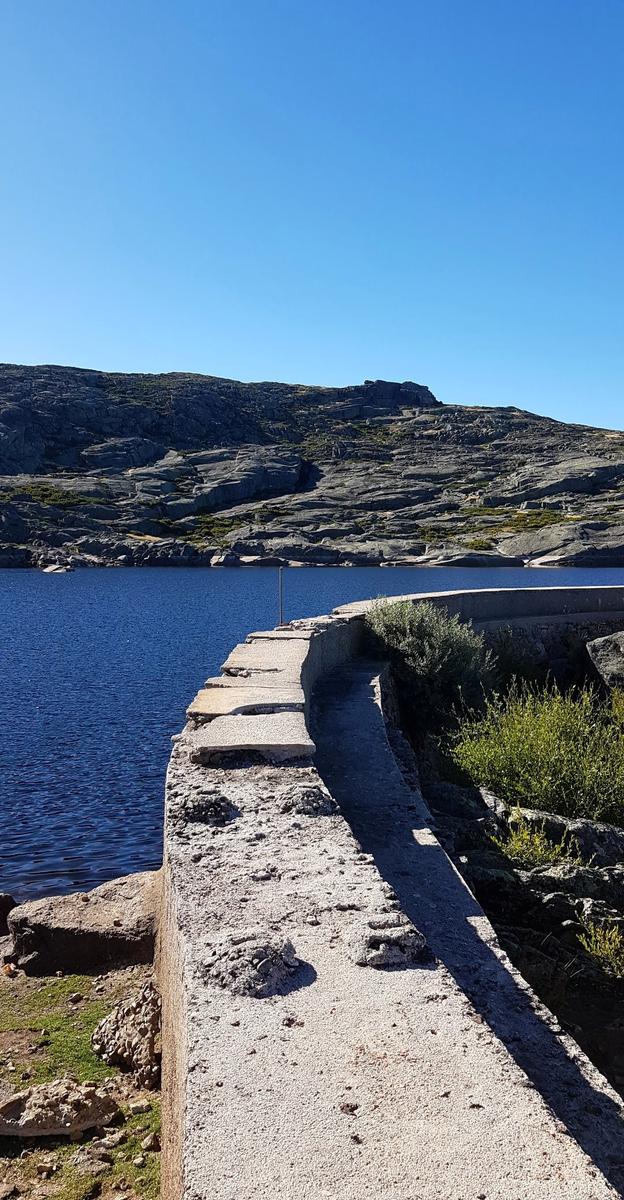 The view looking back after crossing the wall:

And then it was time walk/hike to Torre without too many markers.

Looking back, we were above the clouds:

And as you can tell, we were climbing up from the lakes:

We were following stone cairns (route/way markers) like the one in the next photo as best we could but I think some were just more decorative than instructionary:

Below is the terrain we were on once we climbed up from the lakes:

As I said earlier, keeping one eye on Torre (or in fact on “Torres Balls” as we named them pictured below) and the other eye looking out for cairns we made our way to the top successfully, the Estrela mountains dogs were our only hiccup! You can see our final approach below: 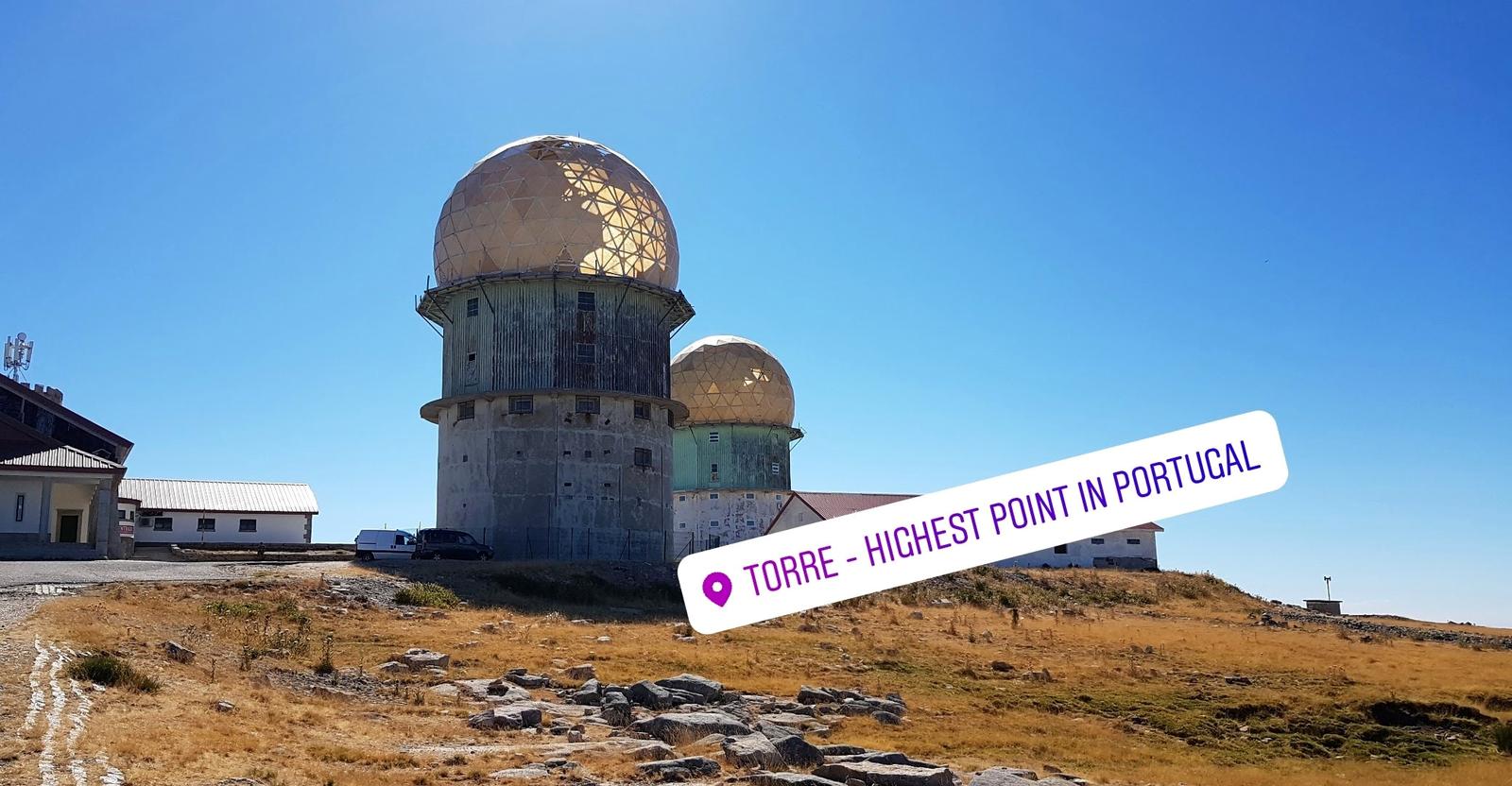 Then we walked the short distance to the Torre marker which is at the centre of a roundabout for vehicles:

The view of “Torres Balls” from the marker: 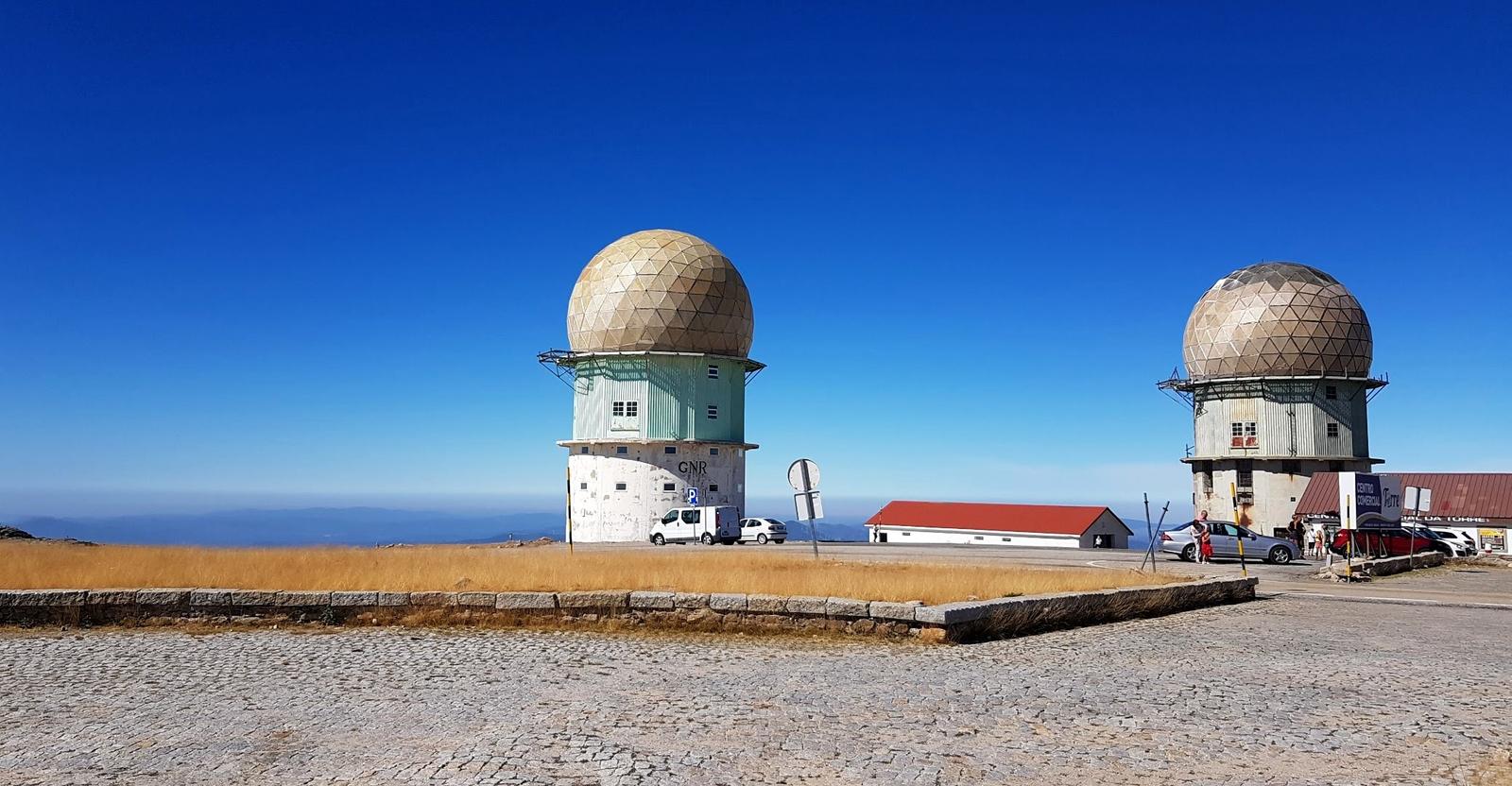 From the Torre stone marker the view is not really that great, BUT facing South/South West, follow the path leads that direction and the view is fantastic! The arrow below is pointing to where the trail is: 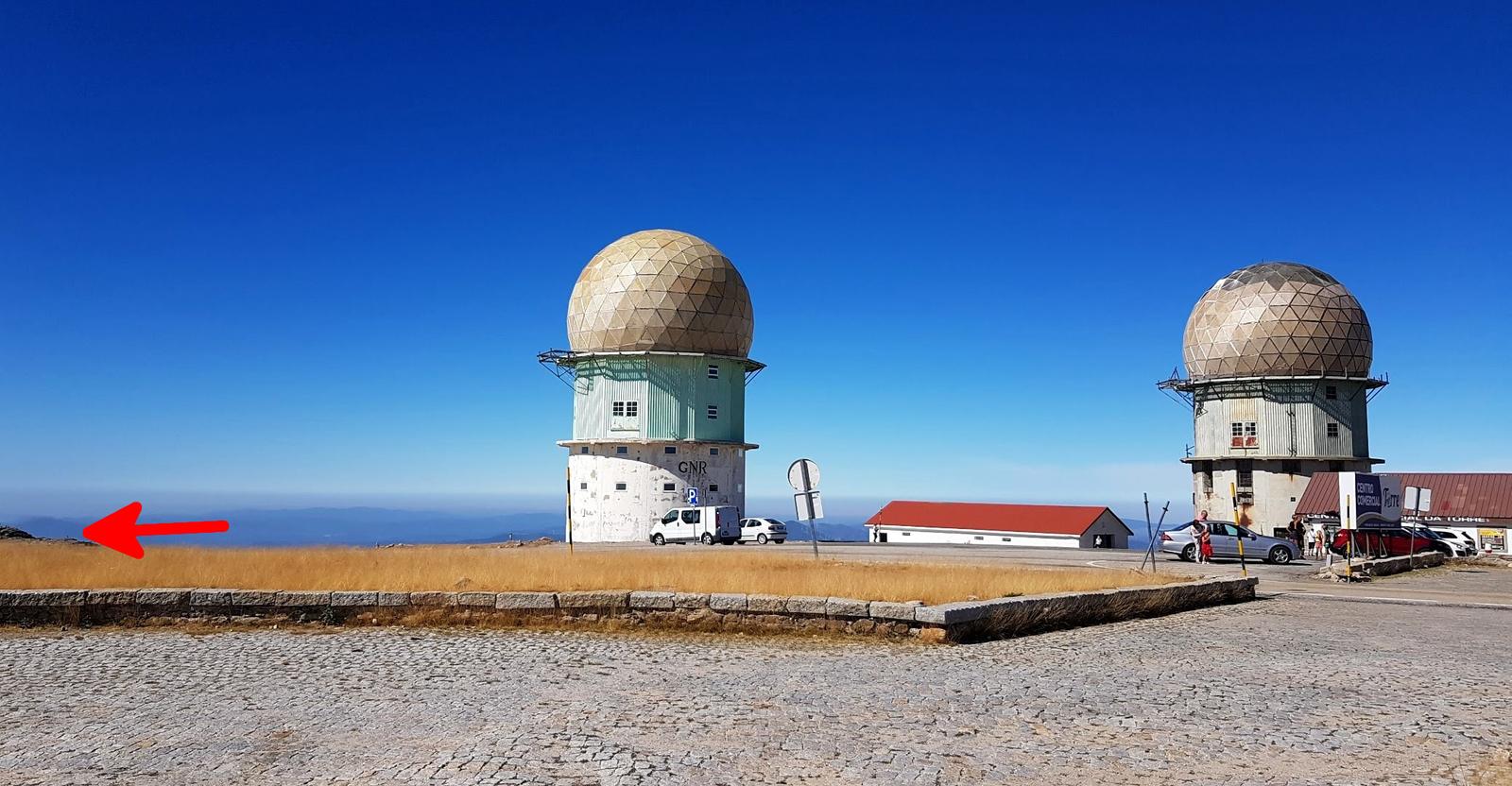 Walk all the way to the cairns:

The best view is from the there:

The arrow below is pointing to Lagoa do Viriato which is firmly on our list of places to visit/hike to next time we are in Serra da Estrela:

After taking lots of photos we opted for a more direct route back to our car - we walked down the ski slope, a quick and easy way back to where we parked and that was the end of our “Torre Experience” :-).

I don’t think that you can visit Serra da Estrela and not visit Torre at least once, especially in the Summer time when access is easy and you do not have to battle ice or snow. If you are short on time you could definitely walk the Covão dos Conchos Trail and visit Torre on the same day/trip. The distance from Lagoa Comprida (where the Covão dos Conchos Trail starts) to Torre is only 11 kilometres, about 15 minutes drive time.

For us the trip to Torre was certainly worthwhile, we enjoyed walking through the landscape and the stunning views. I think we will return again and follow one of the marked trails that start at Torre and head in the direction of Lagoa do Viriato and Pedra do Urso as this an area that we have not yet visited.