A Visit to the Cistercian Mosteiro de Alcobaça.

A Visit to the Cistercian Mosteiro de Alcobaça:

We recently spent a long weekend in Nazaré (post lockdown) and while there we decided to drive the short distance to Alcobaça to visit the Cistercian Mosteiro de Alcobaça. It was a glorious day, already 30C at 10.30am. Alcobaça was really quiet, we were able to park in the square right next to the monastery. COVID19 travel restrictions resulting in a reduction in tourist numbers made for a very enjoyable experience for us.

The Monastery of Alcobaça has been part of the UNESCO World Heritage List since December 1989. The Monastery is:

“… one of the first buildings associated with the Cistercian Order in Portugal. It was founded in 1153 as a gift from the first Portuguese king, Afonso I or Afonso Henriques (1112–1185) to Bernard of Clairvaux, following the king’s conquest of the city of Santarém from the Moors in March 1147.”

“Construction began in 1178, some 25 years after the first Cistercian monks settled in the Alcobaça region. Initially, the monks lived in wooden houses, and would only move to the newly built monastery in 1223. The church proper wasn’t completed until 1252. Church and adjacent monastery are the earliest examples of truly Gothic architecture in Portugal, and the church itself was the largest in Portugal at the time of its completion. The final touch in this large medieval ensemble was given in the late 13th century, when King Denis I (1261–1325) ordered the construction of the Gothic cloister, also known as the Cloister of Silence.” (Source here.)

As you would expect, the monastery and church dominate the town but I could think of worse things to look at! 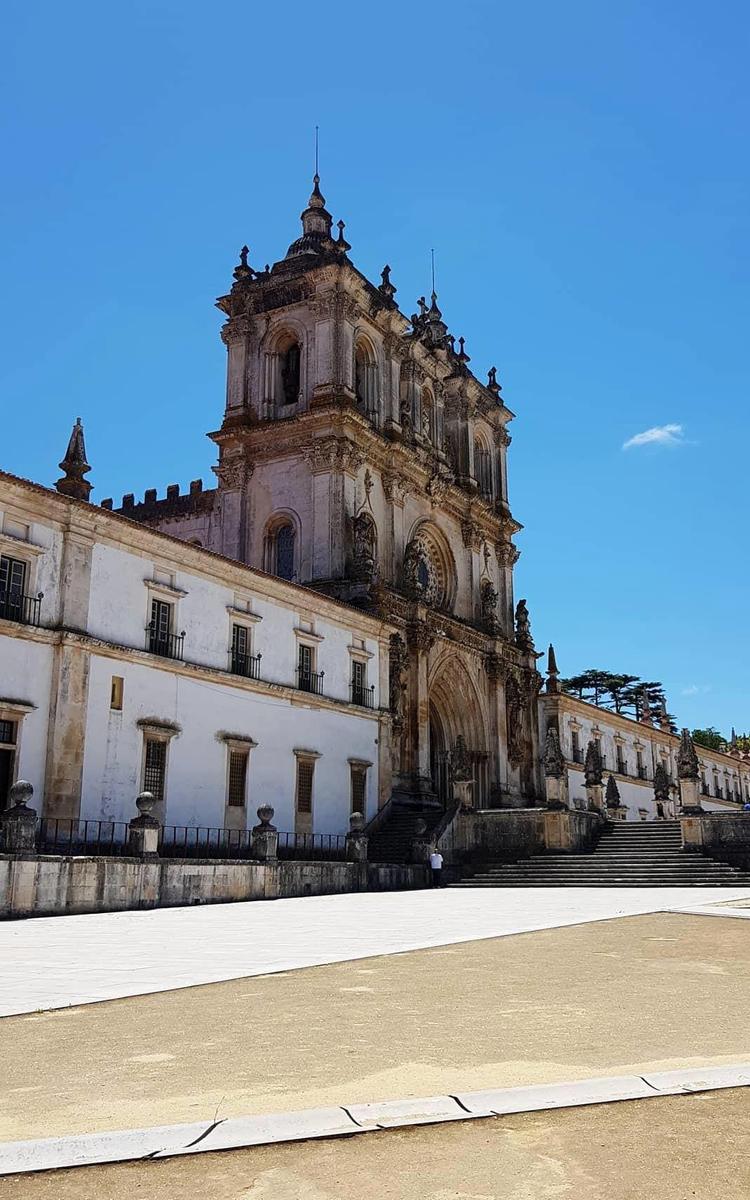 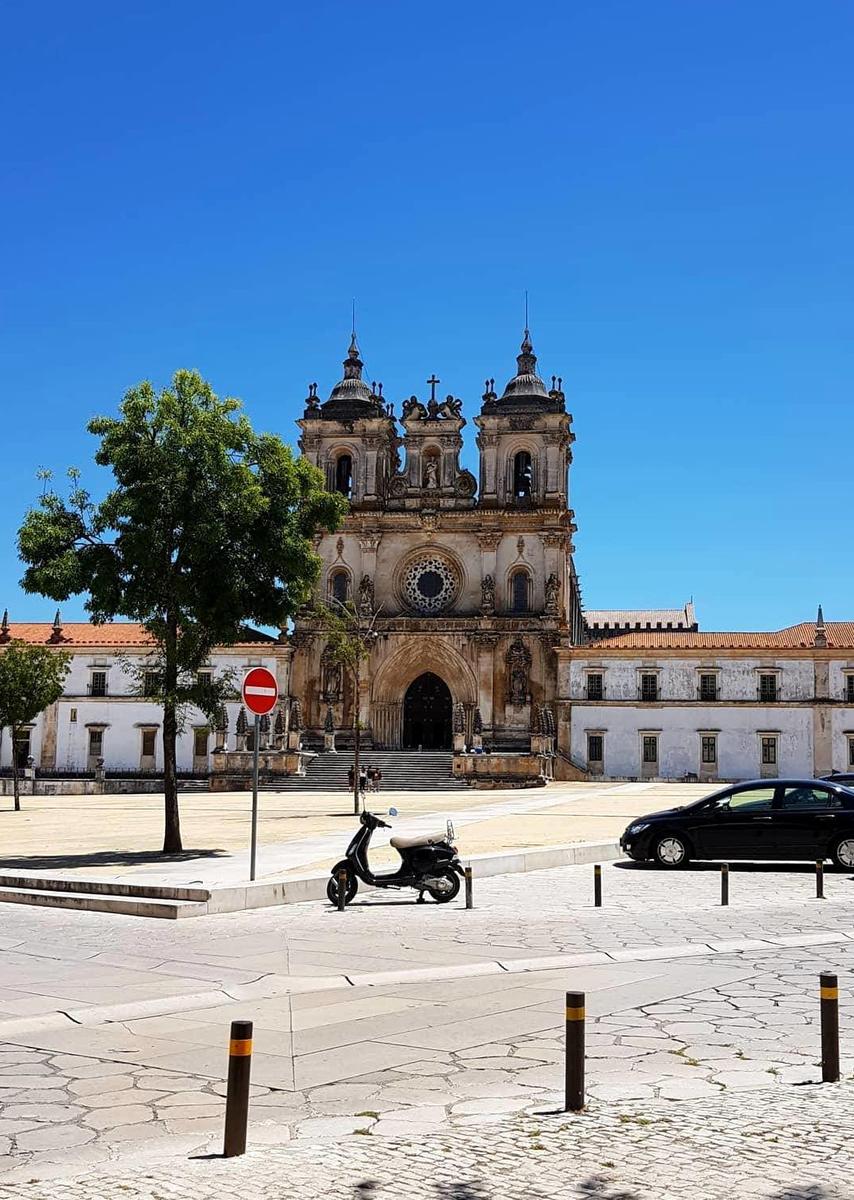 Pictured below is the view from the front steps of the monastery. As you can see there are a lot of cafes etc. dotted around the square/perimeter, the perfect place for you to relax after your monastery tour.

A closer look at the detail around the main entrance:

Time to go inside!

We walked inside the church (with masks on), it was a relief to be out of the building heat of the day and we enjoyed the church and monastery’s cool interior. The ticket office is located just inside the main door of the church, on the left.

New health and safety guidelines outlined when you entered: 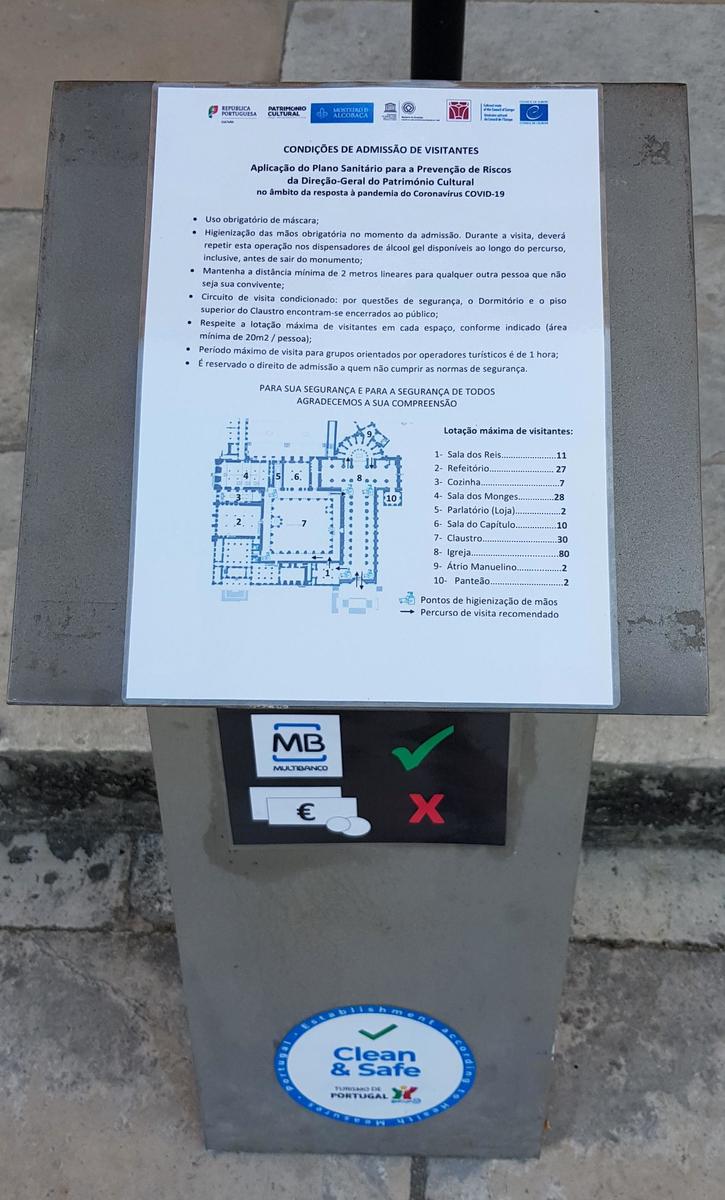 We did not have to pay on the day we visited (Sunday) and instead we were directed by a member of staff towards a door where we began our self-guided tour, simply following signs/arrows through a one way system. There was only a handful of people wandering around with us so it was very easy for us to maintain social distancing rules within the vast spaces of the monastery and church. For more information about tickets and pricing see here.

The Artistic Styles Visible at the Alcobaça Monastery:

Below, taken from the monastery website is a breakdown of the different architectural artistic styles visible at the monastery. Important to note that we could not visit all these areas, only the 10 outlined in the photo above.

First stop was the Kings’ Hall where I was instantly drawn to the beautiful panels of azulejo tiles that depict “the legend of monastic foundation”. The statues of the former Kings were impressive too of course! 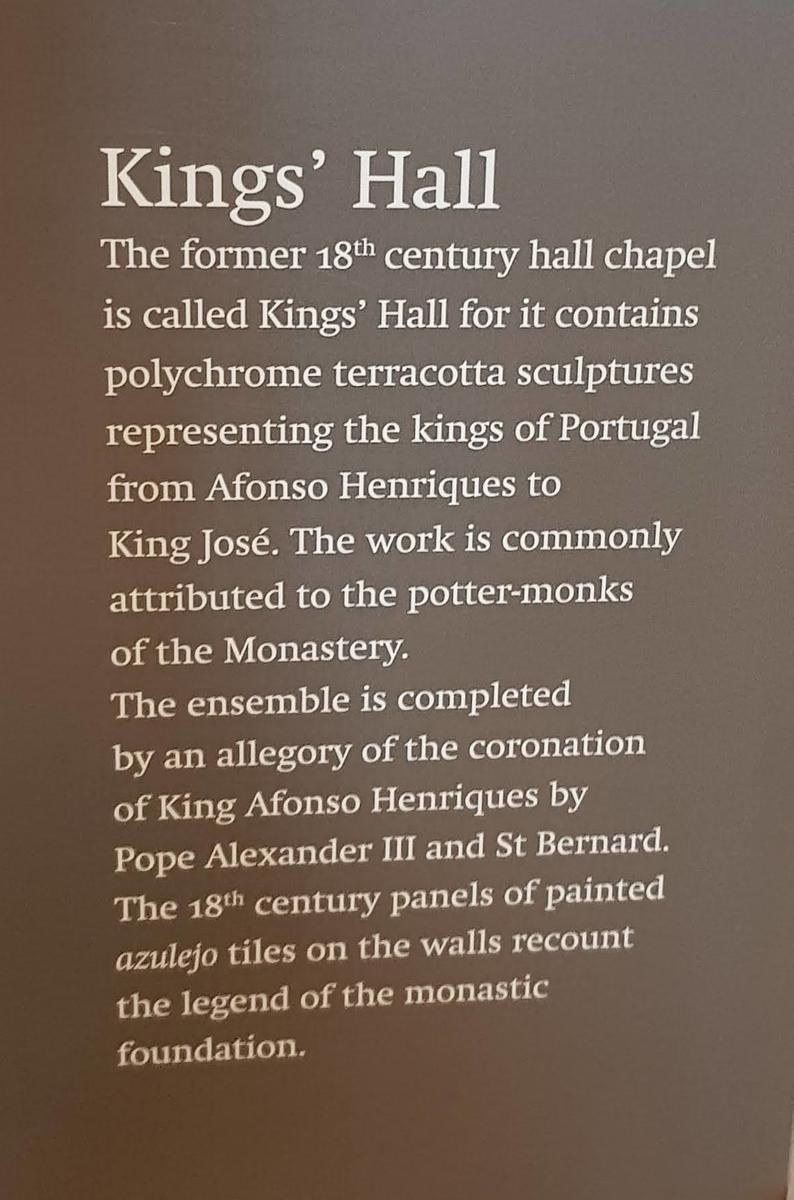 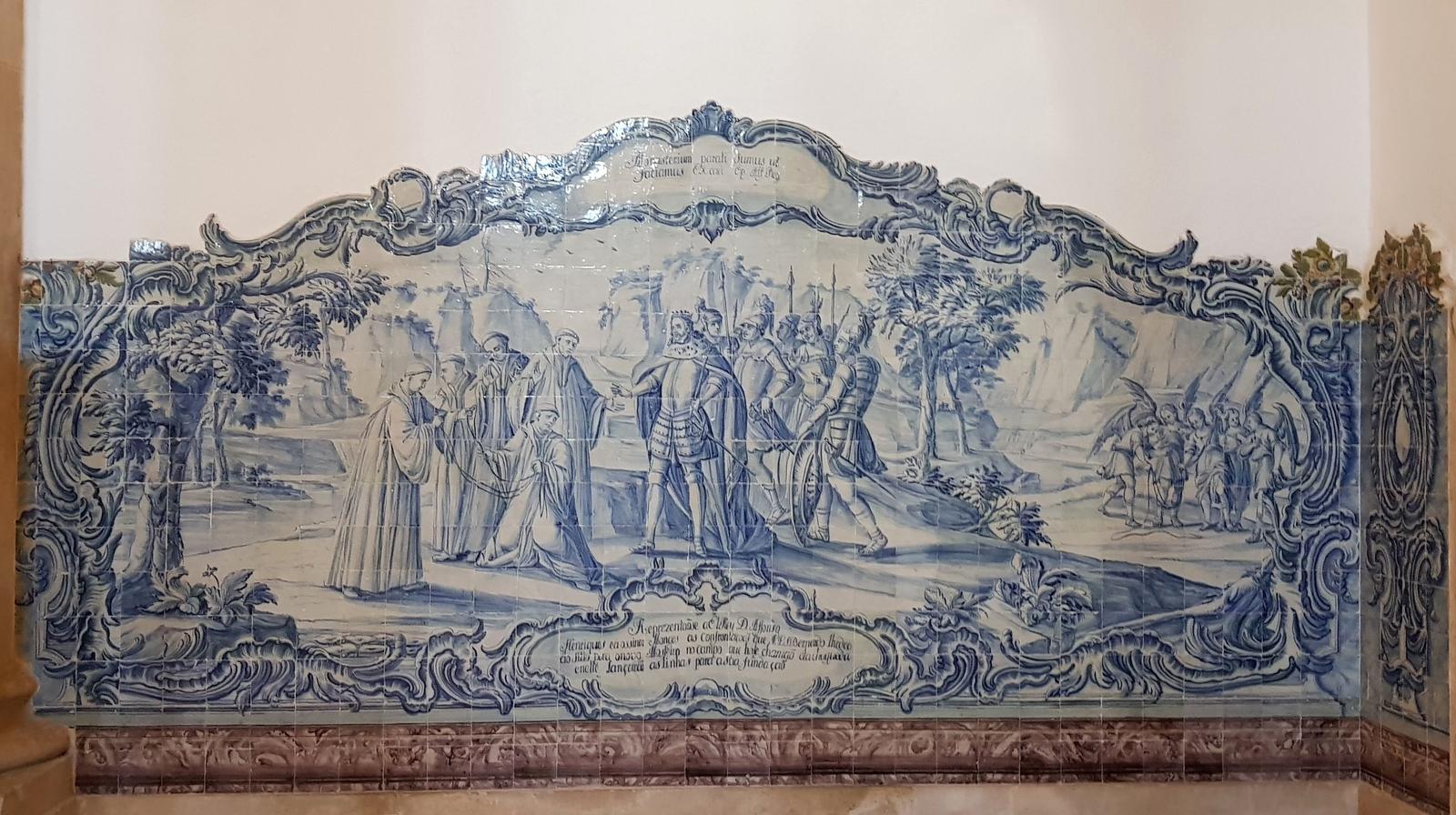 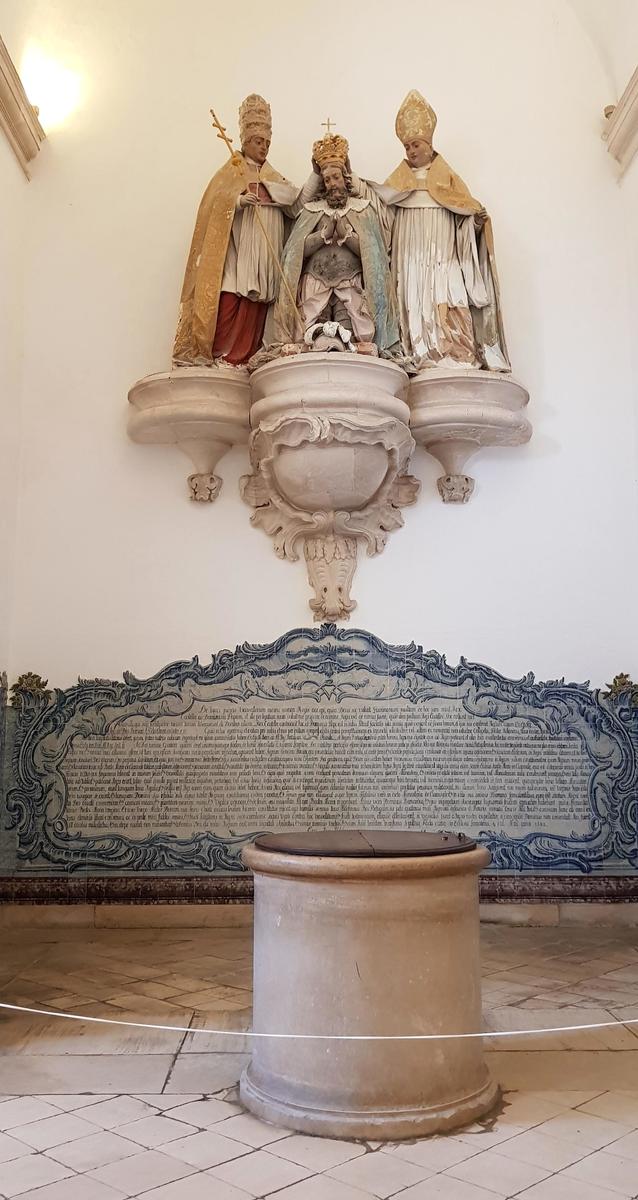 “Built in the 14th century, it forms the heart of the Monastery around which the monks’ daily lives developed. Around it are the Medieval Dependencies: Chapter Room, Canteen, Monks’ Room, Dormitory, Parlour and Kitchen (this one from the 18th century, Medieval Cuisine has disappeared).” (Source here.)

The D. Dinis cloister was also:

“The nerve center of the entire abbey, a mandatory gateway to all facilities, it was also a place for reading and meditation. It is the only medieval cloister of the Monastery of Alcobaça. Built during the reign of D. Dinis, presumably between 1308 and 1311, it was designed by Domingo Domingues and Mestre Diogo, being one of the most beautiful in Portuguese Gothic. Subsequently, in the reign of D. Manuel I (1495-1521) by order of Abbot D. Jorge de Melo, an upper floor was added (Sobreclaustro) with the design of João de Castilho. The entire cloister is vaulted, with round arches and warheads. The vaults accompany the asymmetry of the construction, being irregular mainly to the west. It is important to mention, in order to better understand the evolution of the respective construction, the archaism of some of its elements, side by side with others dating from the 14th century.” (Source here.) 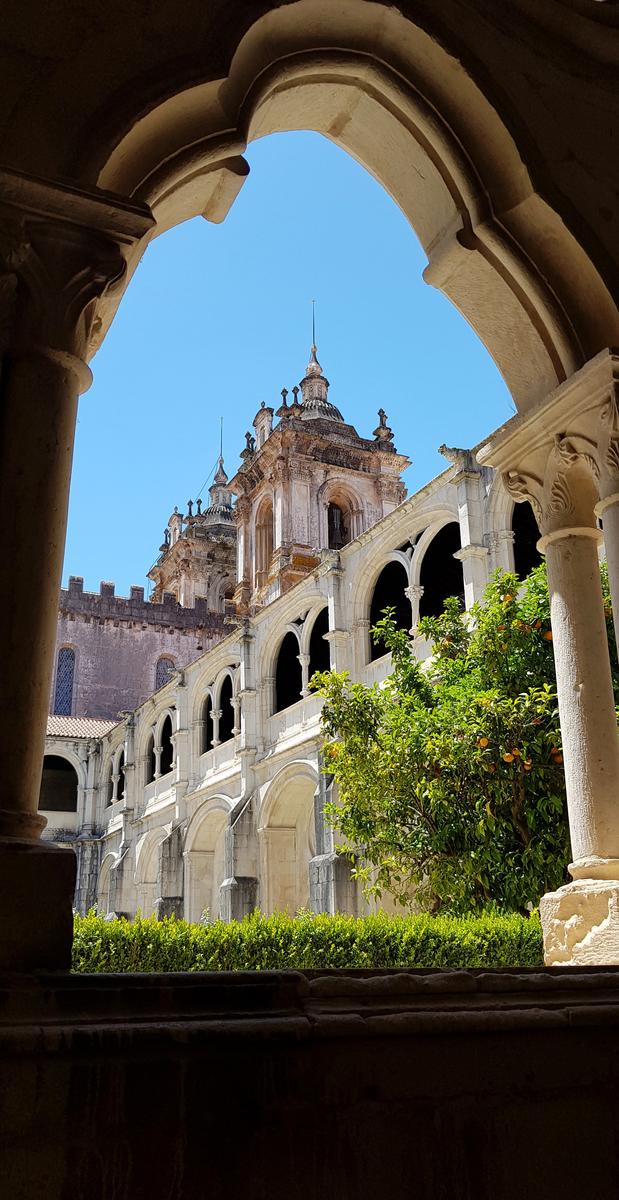 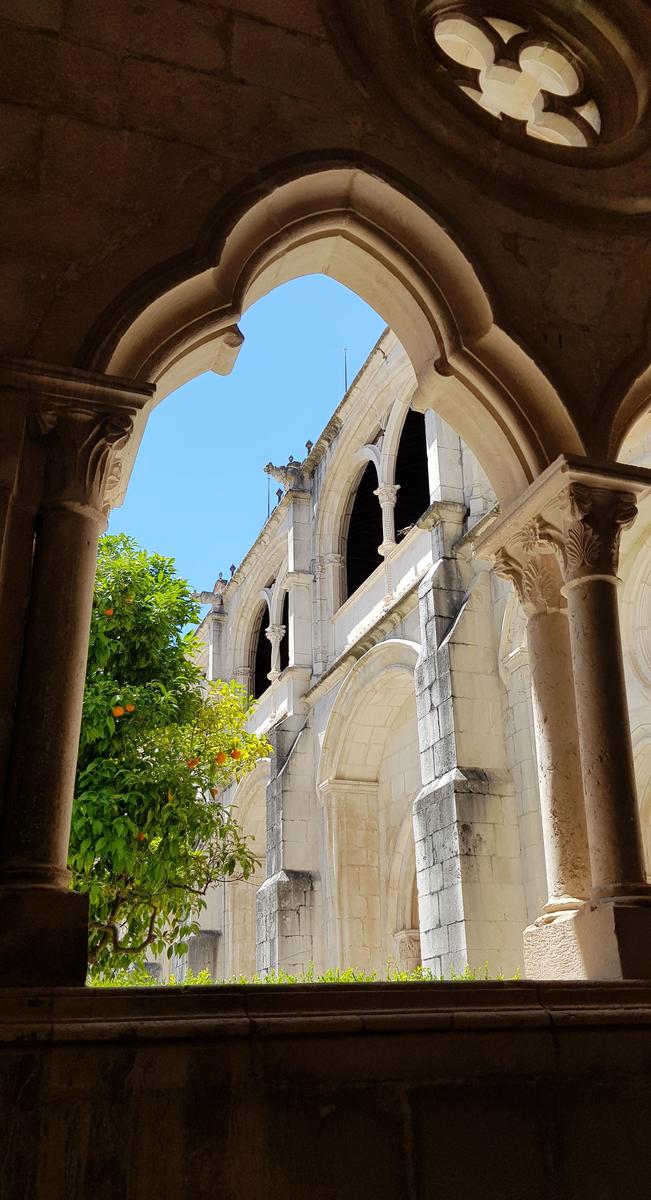 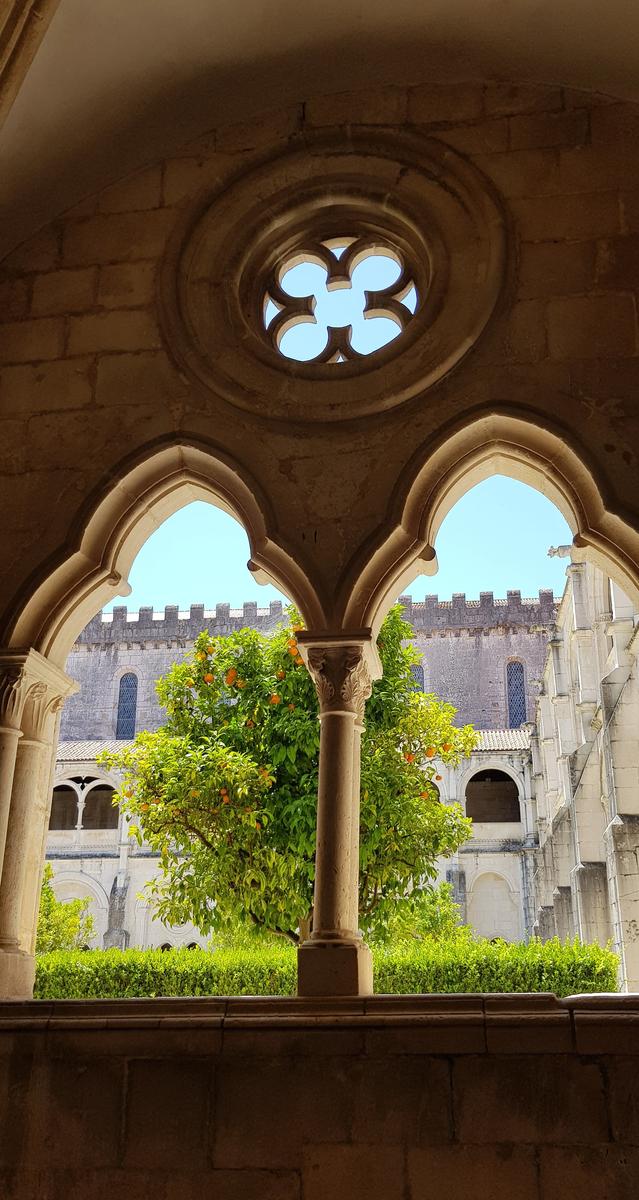 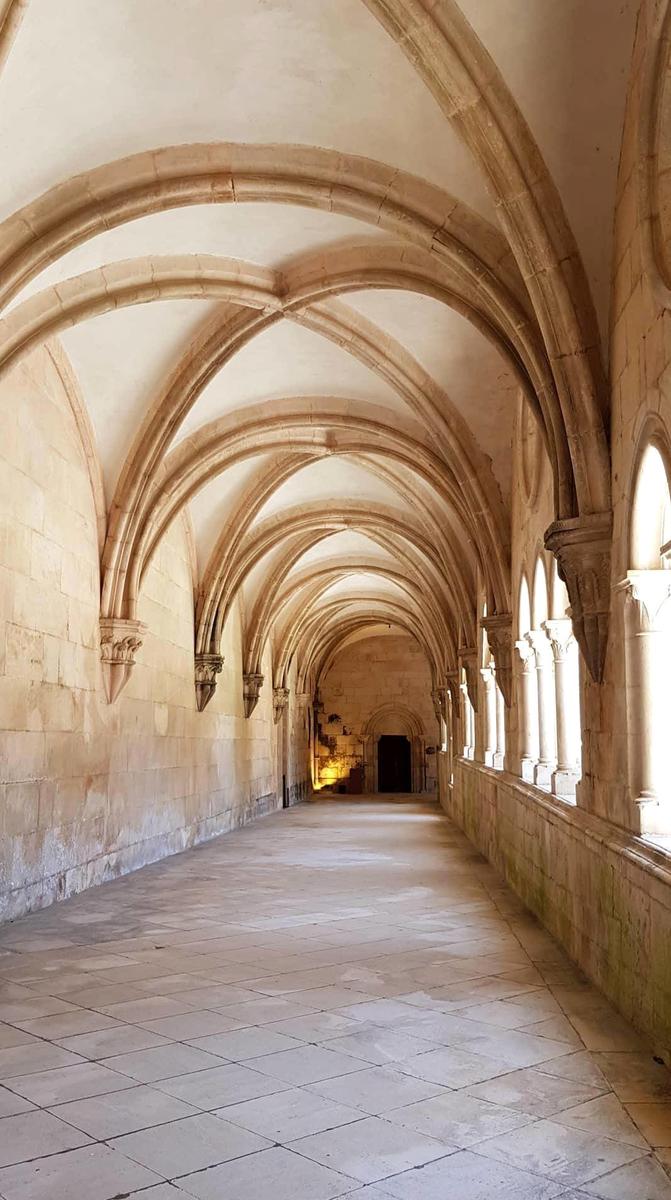 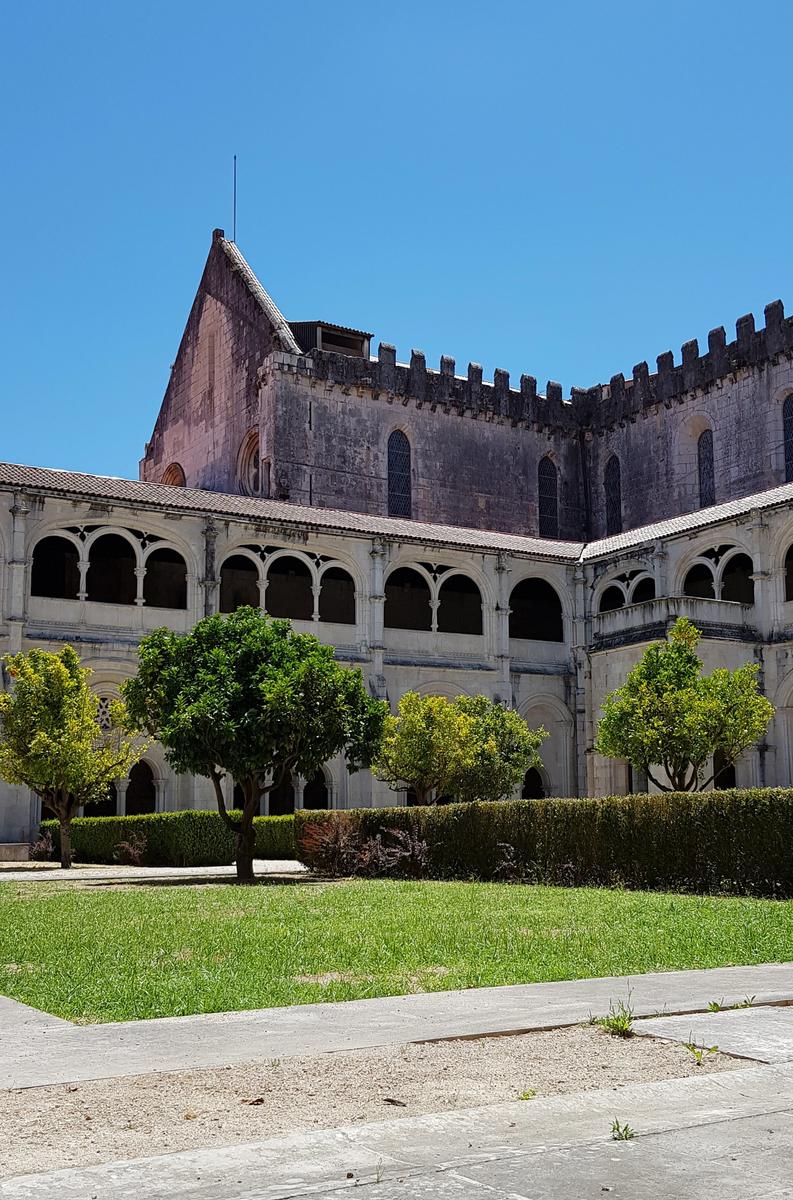 It most certainly looks like an idyllic place for reading and meditating.

As you walk around, visiting the other areas off the cloister, you get alternative views of the cloister/courtyard:

There are also fountains, statues and other monuments along the way:

The first room off the cloister that we were guided towards was the Kitchen. According to the information provided, the kitchen was:

“One of the rare places where monks and converts were together.”

A little more information about the kitchen:

“The current kitchen, located between the Refectory and the Monks’ Room, has a large chimney lined with tiles in the center, as well as all the interior walls, and, at the bottom, a tank with running water from the Levada that was intended for various washes. Its masterful and grandiose aspect constitutes a “surprise effect” in the context of medieval stripping around the Silence Cloister. “ (Source here.)

Sorry about the blurry quality of the first photo below! 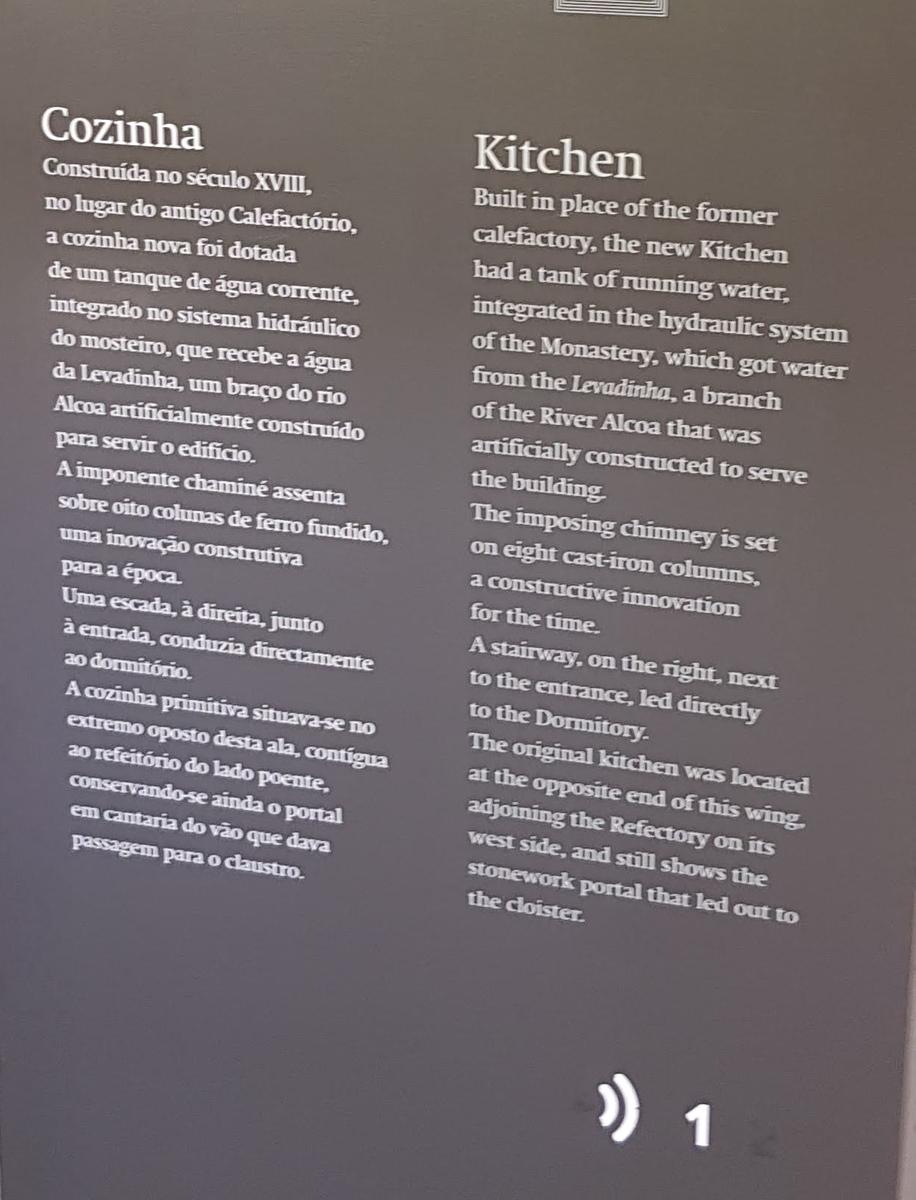 We walked on and visited the Refectory and the Chapter House before continuing into the church. 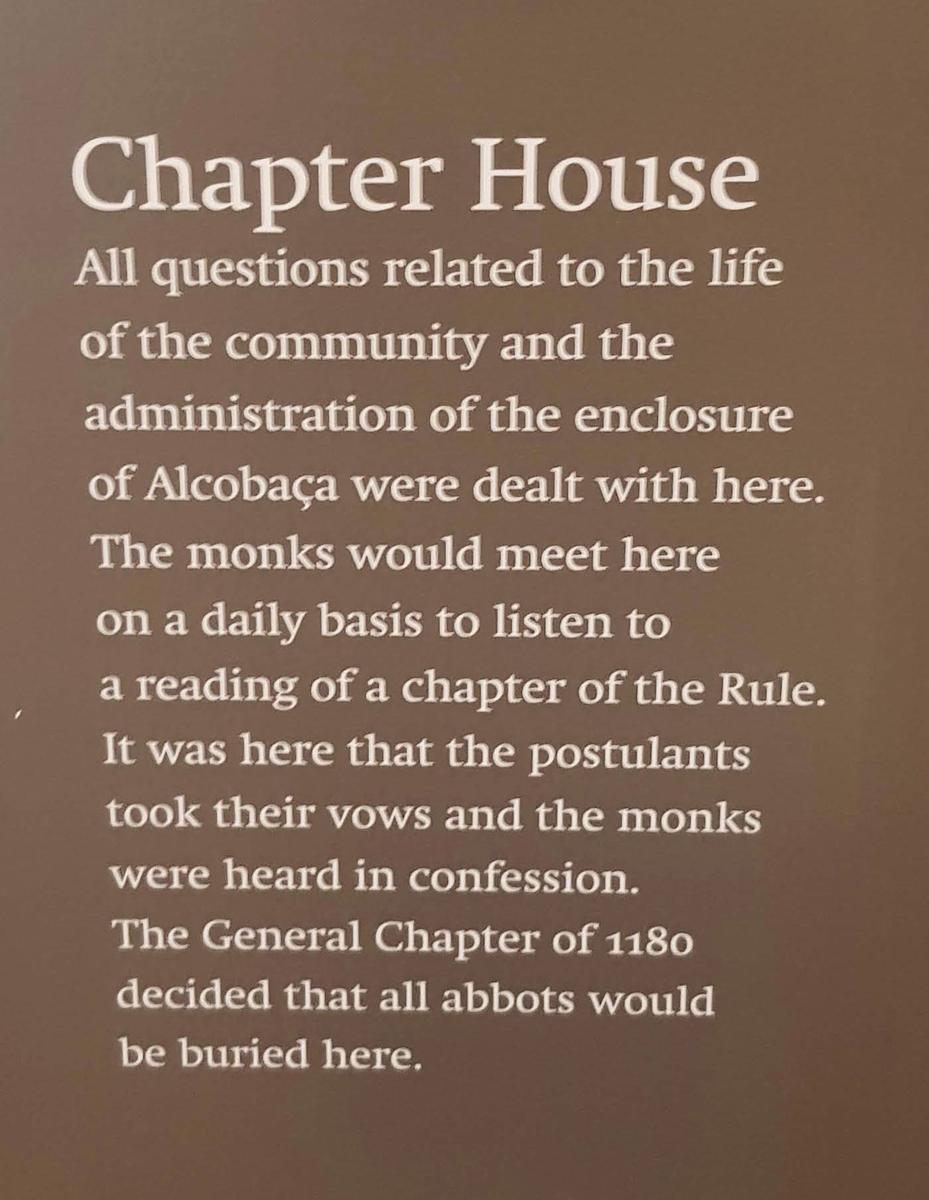 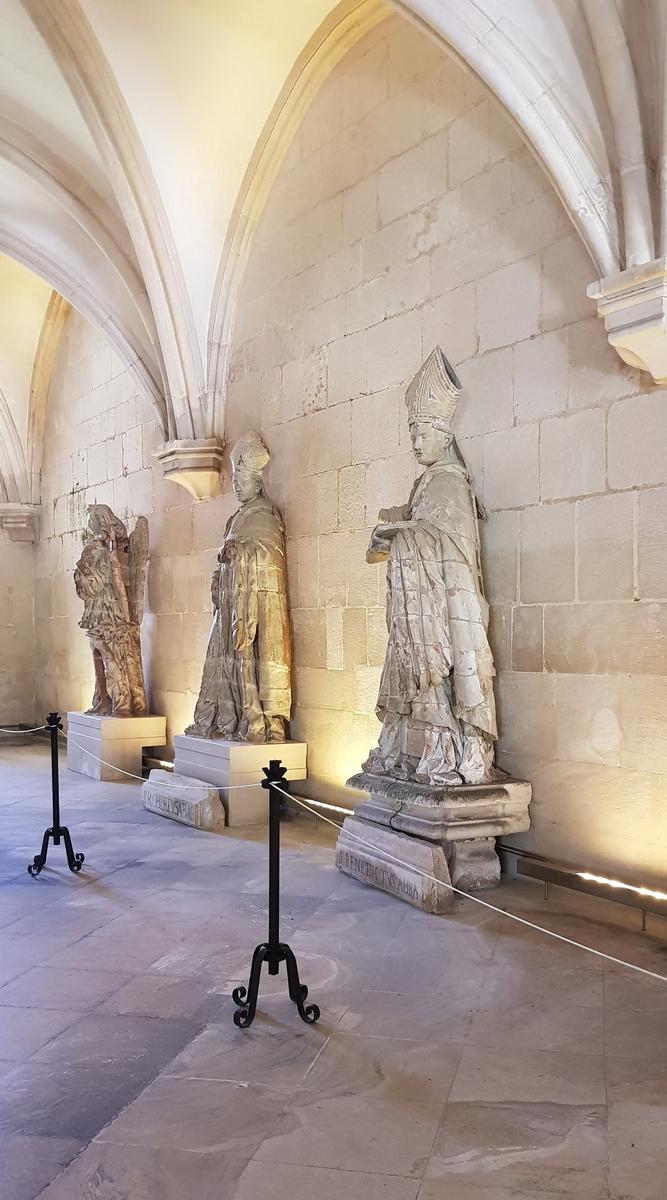 The church is so impressive. We took our time walking around, again it was very quiet (as you can see in the photos below) so easy to maintain social distancing regulations.

More about the church, taken from here:

“Consecrated in 1252, it is the first Portuguese Gothic example. Its large dimensions and the remarkable elegance of its proportions make this abbey a finished example of the stone / light dichotomy.

Its construction started in 1178, and the date of the respective terminus is not fully known. This abbey adopts the shape of a Latin cross (symbol of Christianity), being composed of the main nave and the transept, where the tombs of D. Pedro and D. Inês de Castro are located.

The nave is divided into three: the central and the lateral ones, which served only as a passage corridor. The construction started by the head that consists of nine radiant chapels of trapezoidal plant, connected to each other and to the transept by a wanderer, being covered by vaults of cradles.

The lighting diffuses through the large rosette, the two lateral spans of the front, through the narrow cracks in the side walls and also through the rosettes and windows of the two tops of the transept and the high windows at the head.

The entire abbey is supported by buttresses that, on the south wall of the naves and at the top of the south transept, correspond to the alignment of the toral arches and forms.

The north transept had direct access to the Dormitory of the Monks. At the opposite end of the transept, under a large rose window and two large windows, there is still the access door to the monks’ cemetery, commonly called “Porta dos Mortos”. 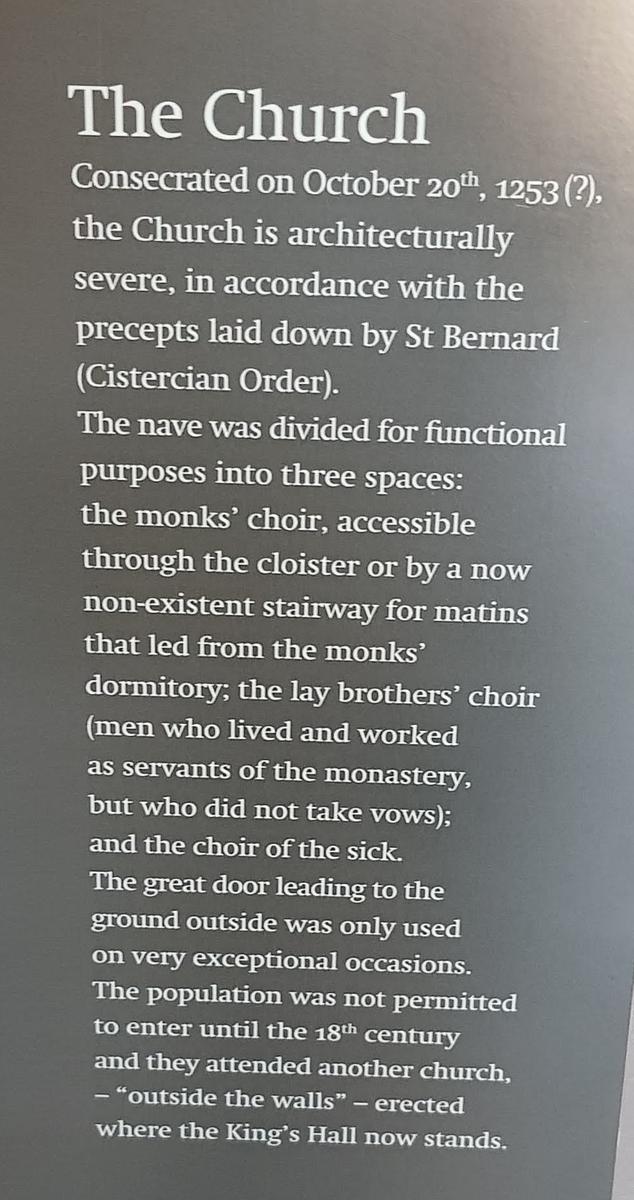 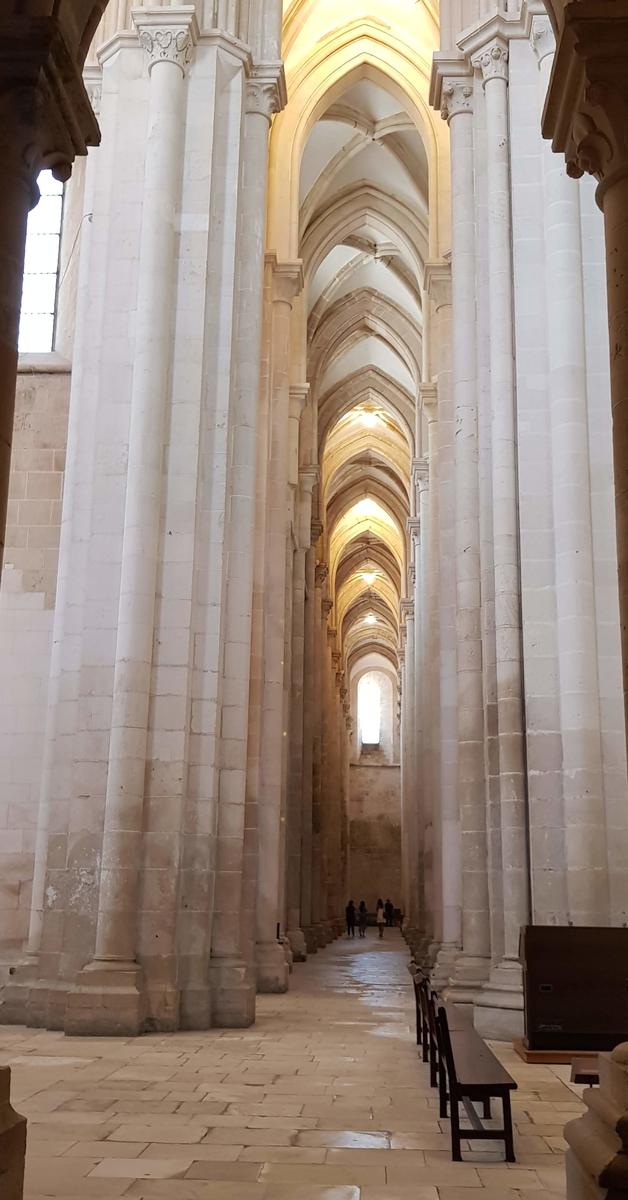 There are two really impressive tombs inside the church. You can find more information and detailed images of them here and here. We found ourselves spending a lot of time studying the detailed carvings on both tombs, they are amazing.

The tomb of D. Inês de Castro is:

“… based on six supports whose figures refer to hybrid beings of human faces and animal bodies.

The lateral edicles are completely filled with scenes from the New Testament that end, on the face of the headboard, with the figuration of Calvary.In contrast, the face of the feet depicts the Last Judgment organized in three registers along a winding line from Leviathan’s mouth. Christ in majesty presides over the divine court. It identifies the Virgin kneeling and surrounded by angels and apostles and the miracle of the Resurrection. The lying figure of D. Inês de Castro is crowned and four angels are supported by his head and mantle, accompanied by two turf angels. A heraldic frieze with the shields of Portugal and Castro casts the decoration of the ark at the top.” (Source here.) 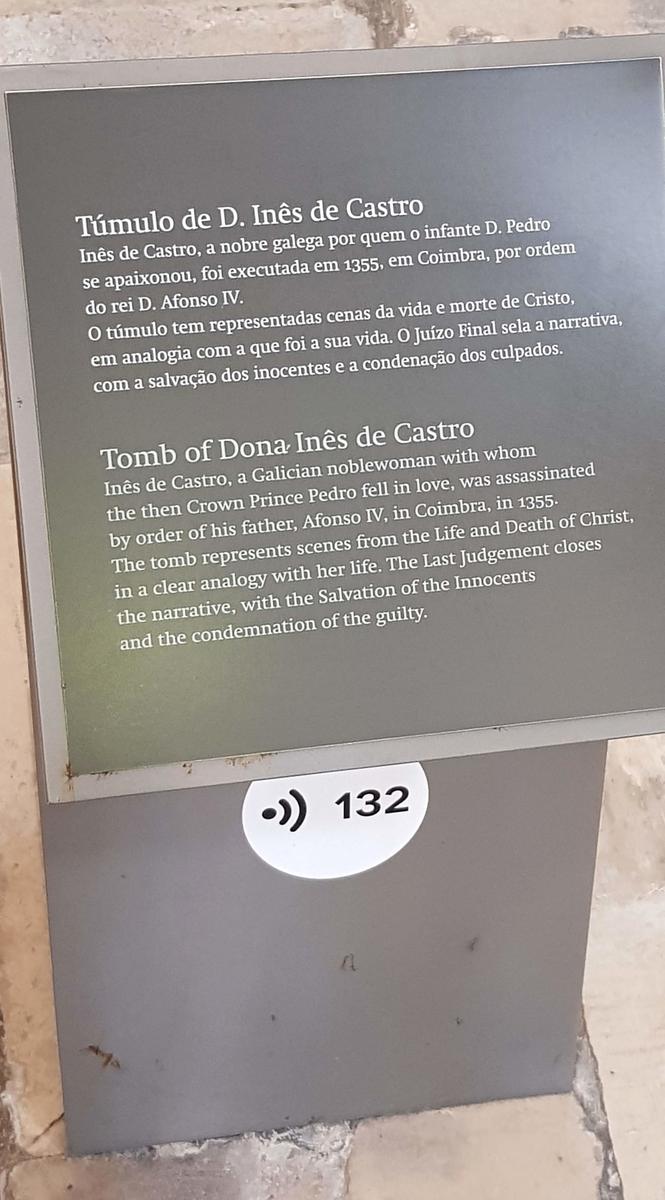 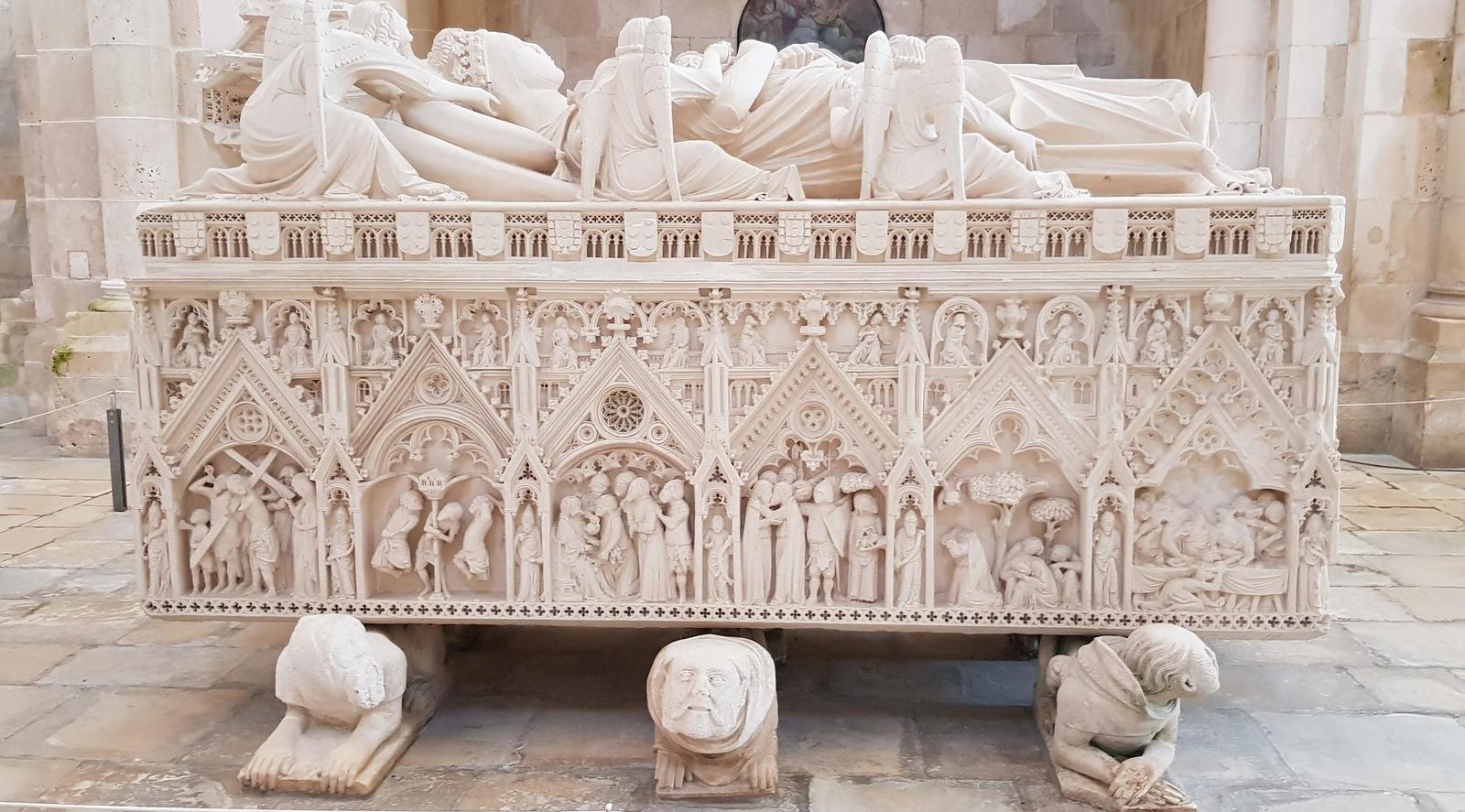 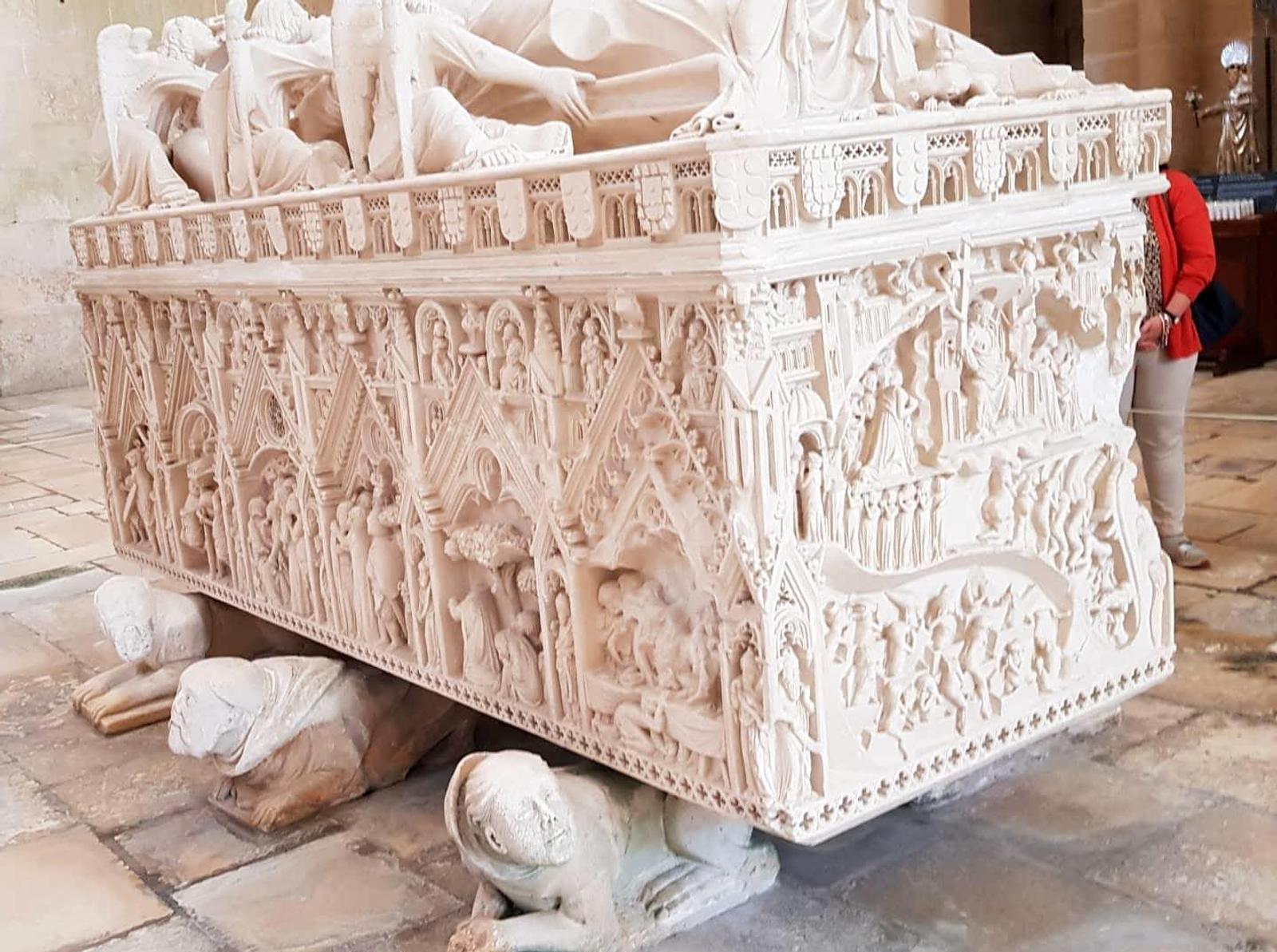 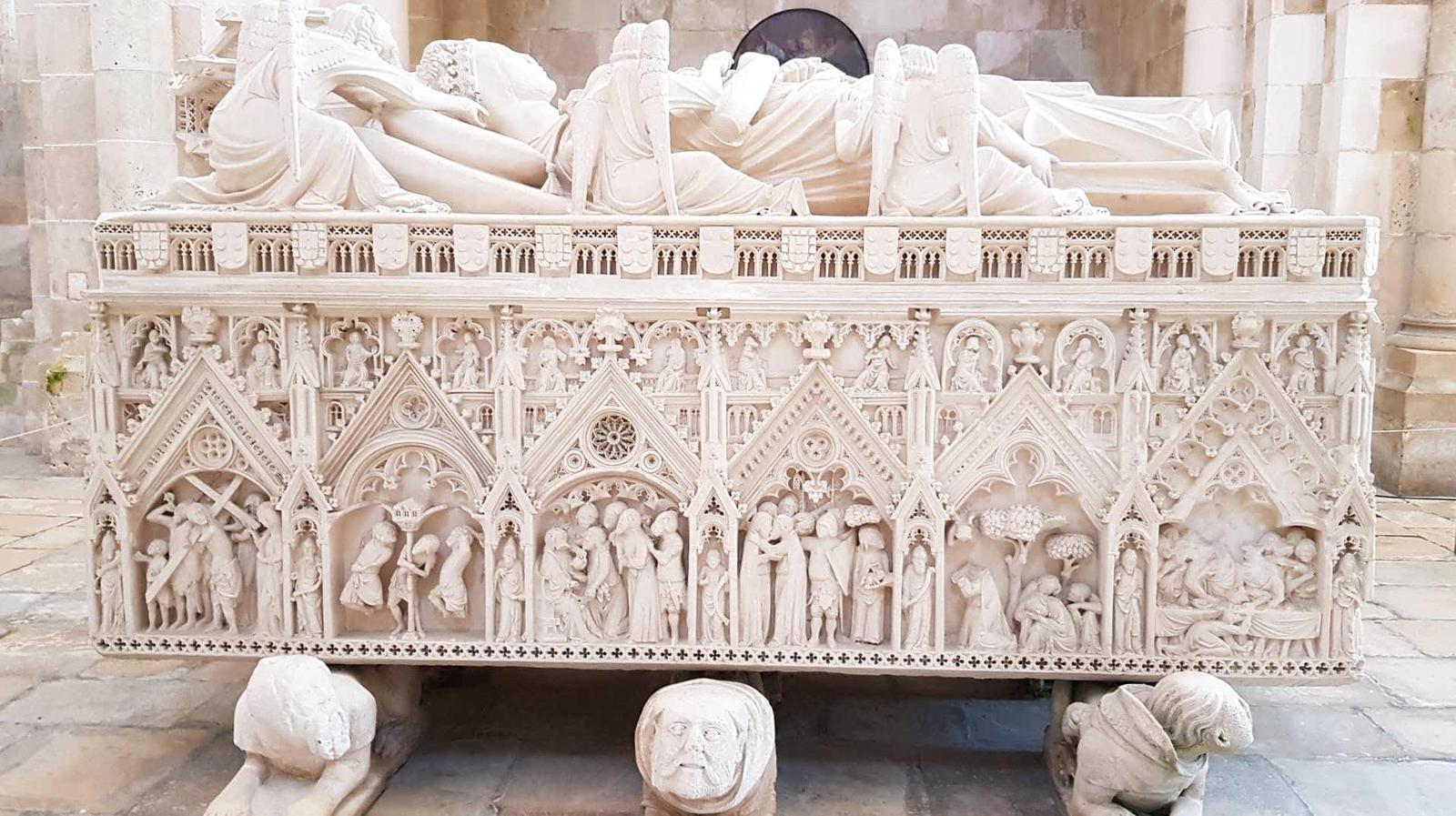 The second tomb is that of D. Pedro. The decoration of the tomb of D. Pedro is:

“… predominantly filled with Gothic buildings containing passages from the life of São Bartolomeu.

At the head, we find the most emblematic element: the rosette, formed by eighteen small buildings arranged in two concentric circular bands where the Wheel of Life (exterior) and the Wheel of Fortune (interior) were represented. In an upward direction, from left to right, happy moments are shared; the tragedy is in the downward direction, where D. Pedro stands out in his tomb, in contrast with the opposite image of the King in majesty, according to a vertical axis of reading that the epigraph inscribed under the underline underlines “A (qui) is the end of the world)”.

On the face of the feet, the precepts of good death are represented: the viaticum and extreme unction.

The lying figure of D. Pedro appears and holds the sword with his left hand, being flanked by four angels who support his head and shoulders, which are followed by two turf angels. At the foot of the figure of D. Pedro lies a dog, in the transversal direction. A heraldic frieze with shields from Portugal, finishes off the upper part of this tomb that rests on six lions.” 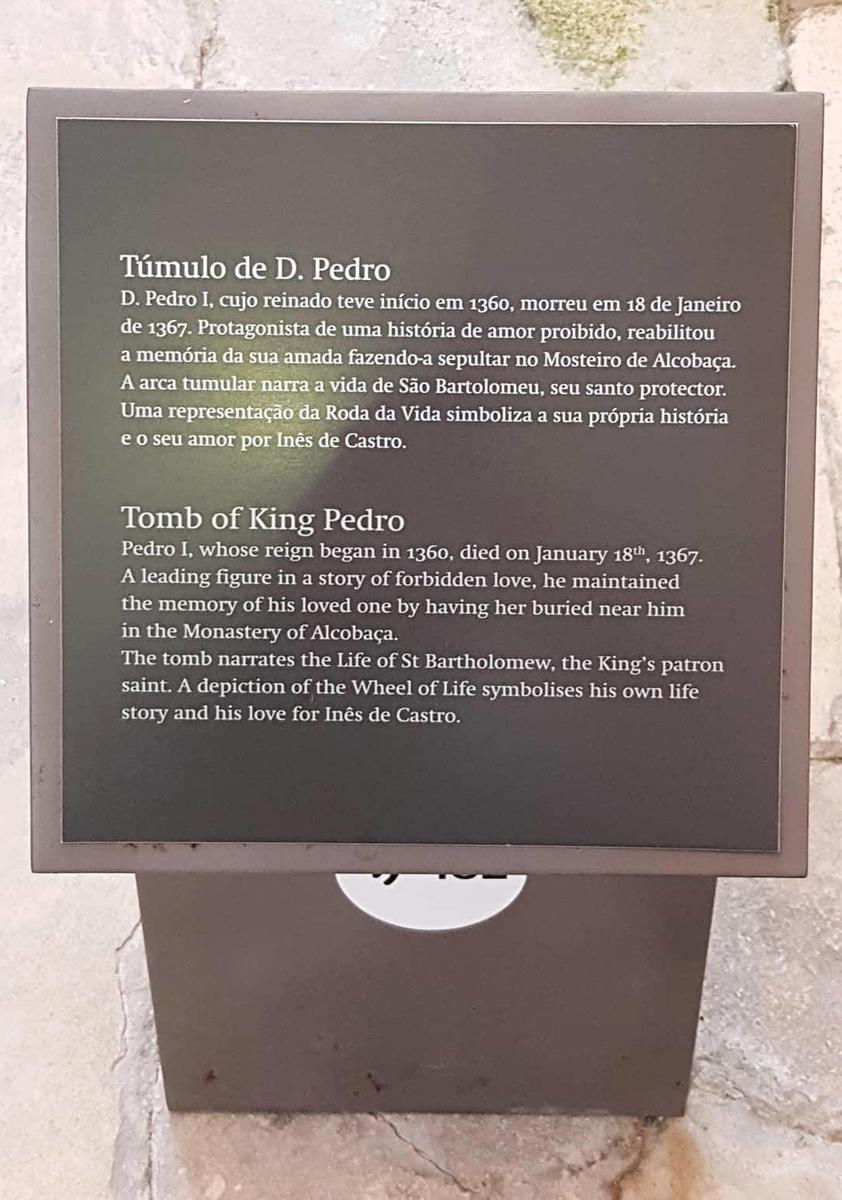 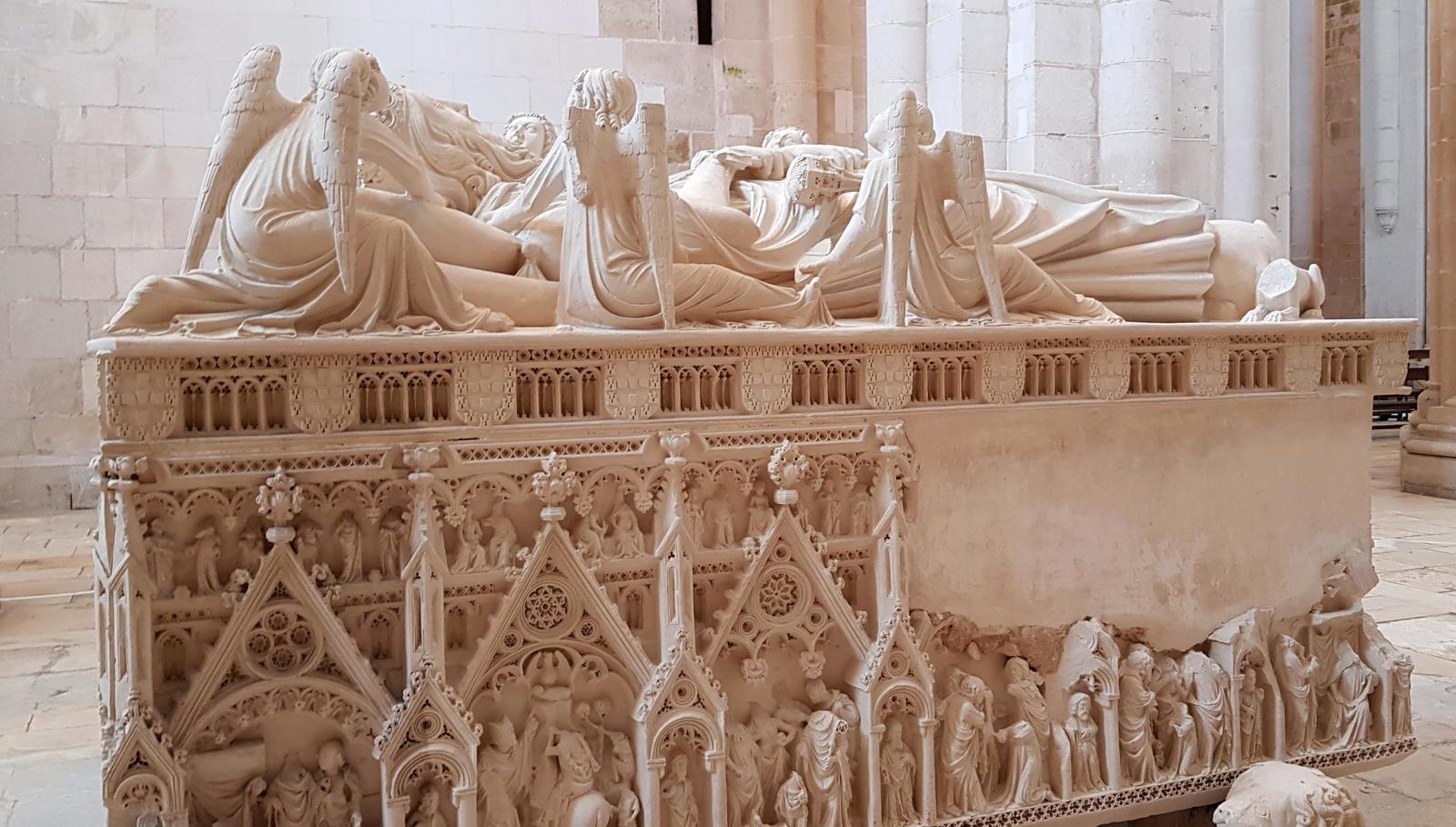 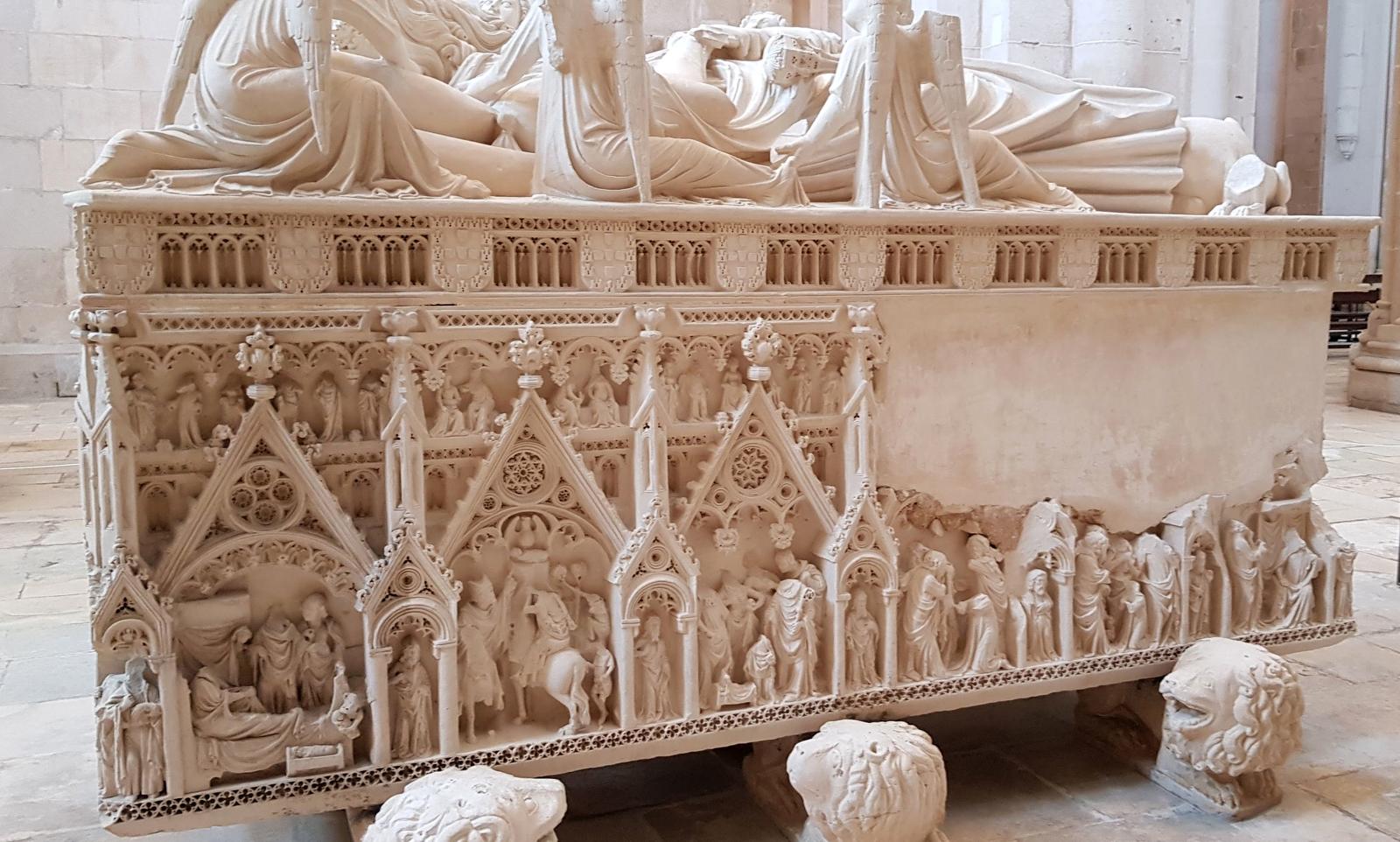 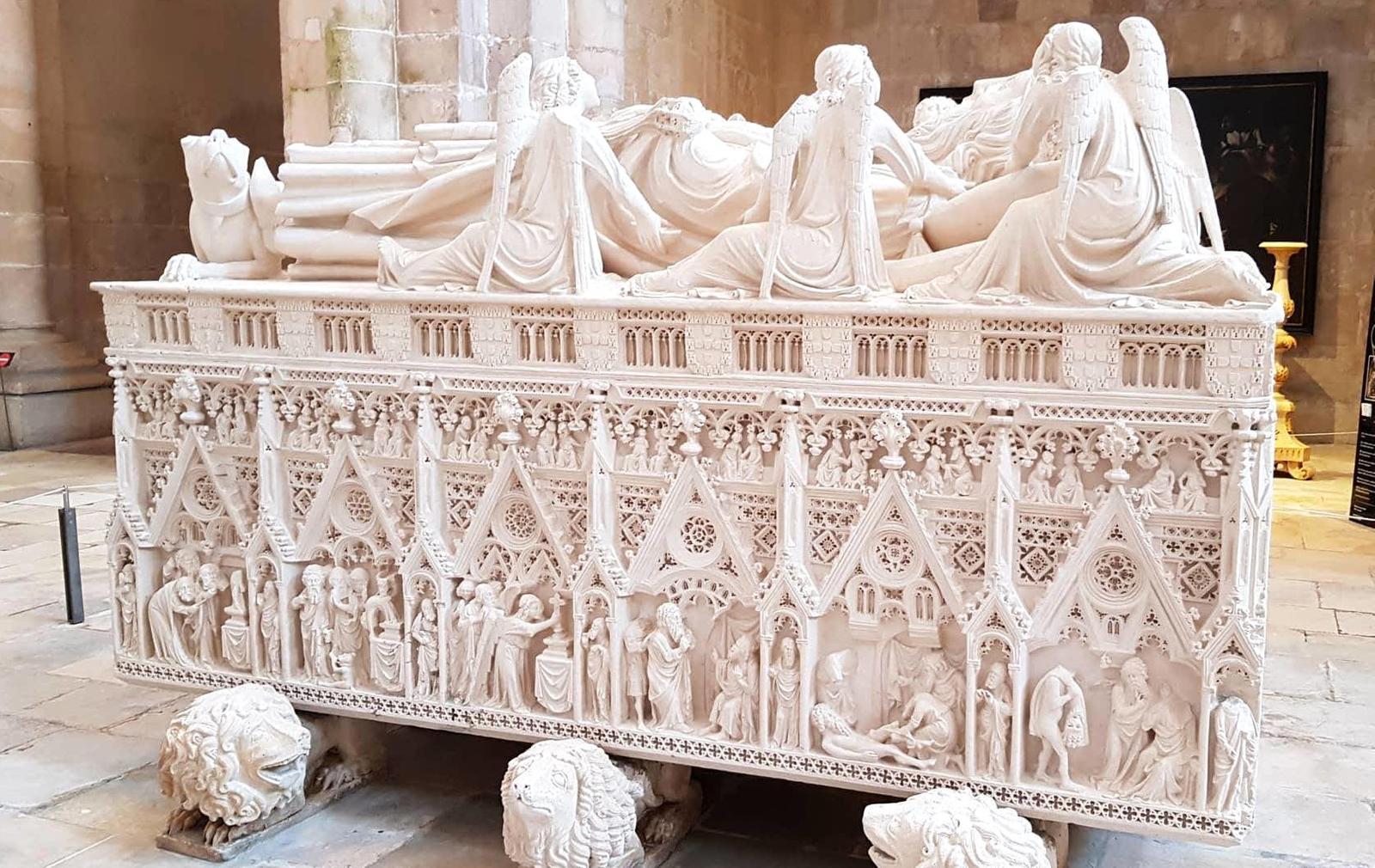 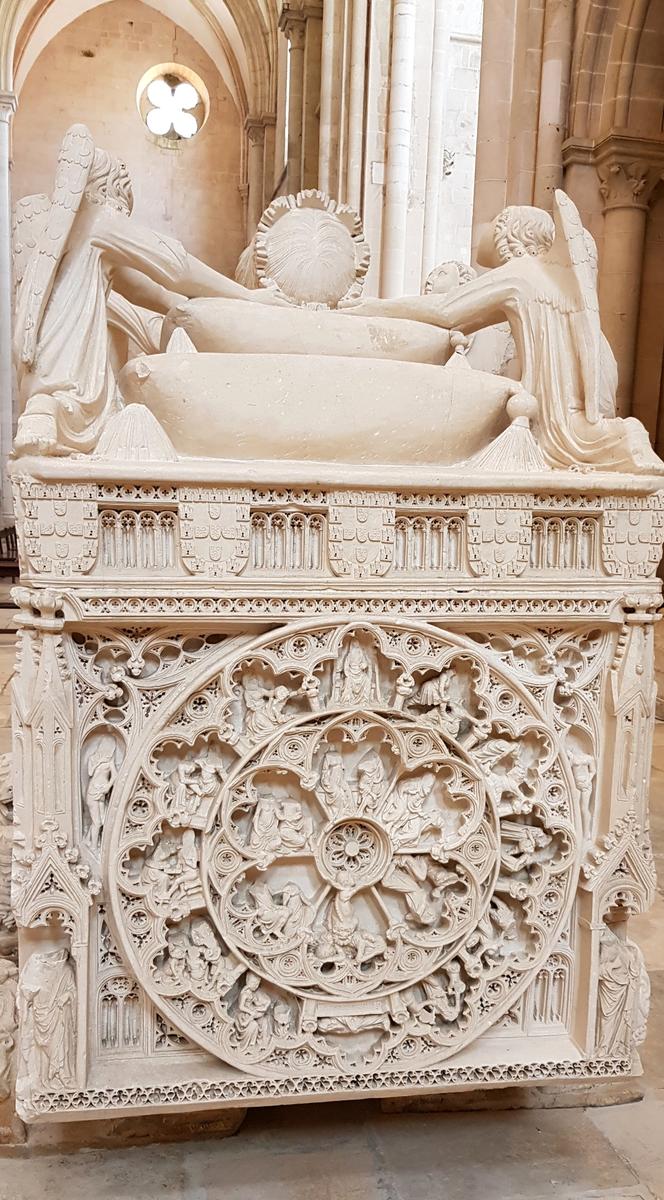 As you would expect, there are smaller altars and other features around the church, here are a few that caught my eye: 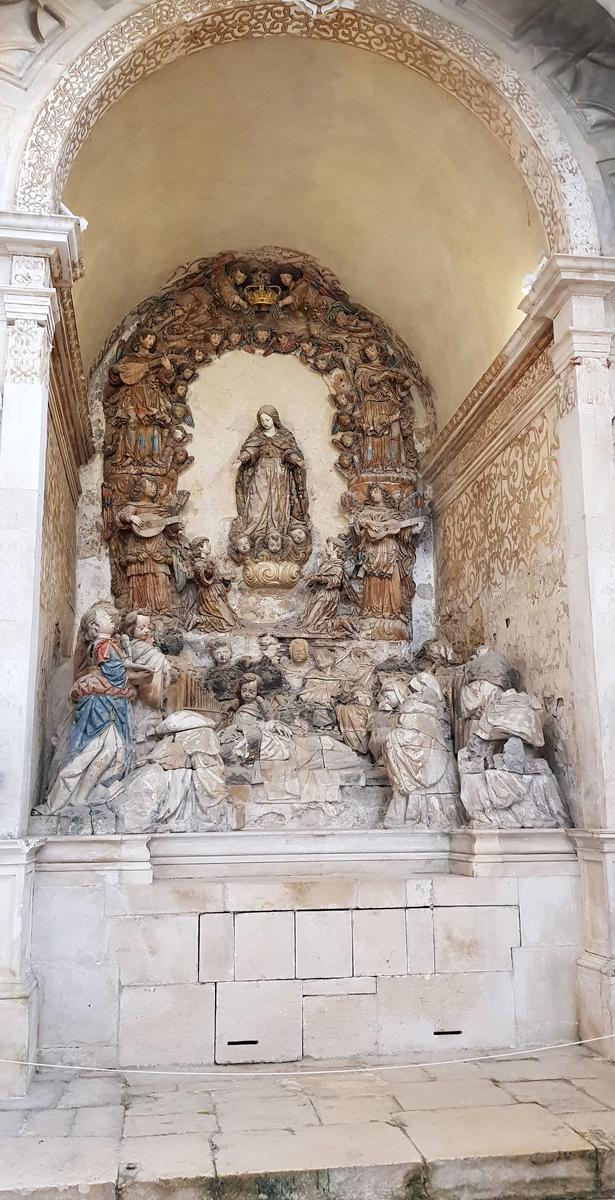 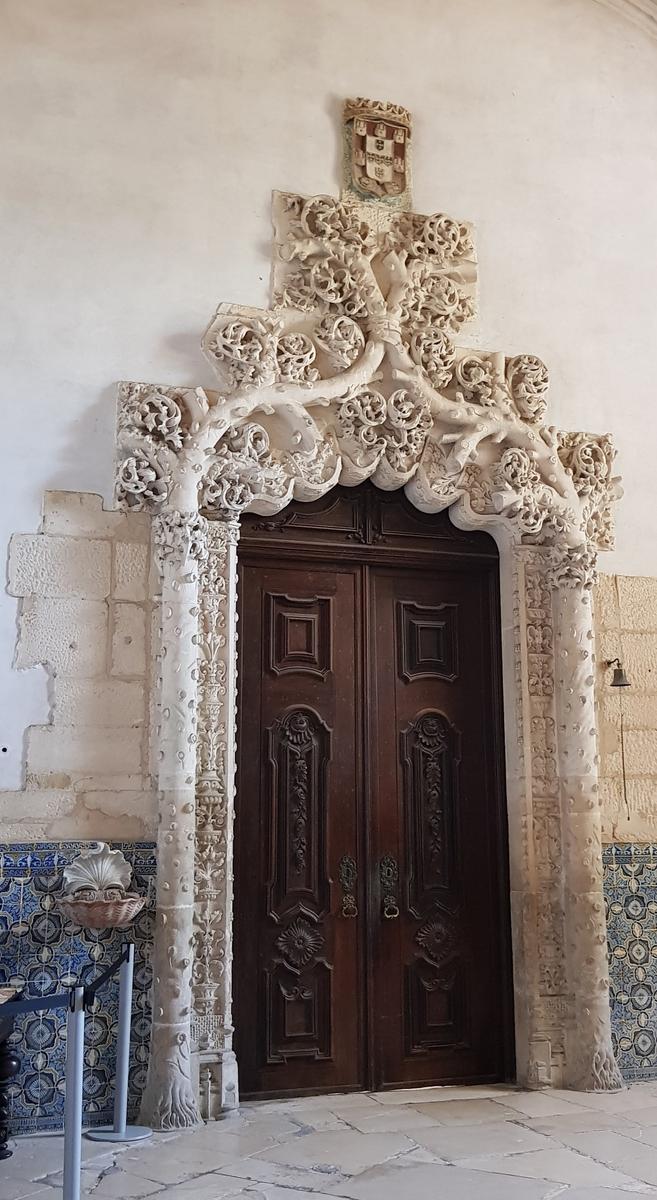 We both enjoyed our visit to the monastery and church of Alcobaça and would definitely recommend visiting if you are in the area. I think regardless of whether you are religious or not the monastery is beautiful and interesting and the architecture alone is worth seeing.